You are here: Home / Lifestyle / A Fresh Start Is Like Jumping Out Of An Airplane

Starting on a new adventure can be both exciting and scary at the same time—like jumping out of an airplane. I should know, because I’ve done so before.

No one told me that the first time you skydive, you aren’t supposed to do so solo. Apparently the norm is to skydive with an instructor, and then go solo. I had no idea. It wasn’t something that had been on my ‘bucket list’ for a long time, or something that I’d been wanting to do for a long time. Really, how would that be possible—I went skydiving when I was 18. The idea of going skydiving just came up with a few of my friends from work, and it seemed like it could be fun, so I agreed to go ahead with it. I was young, and hadn’t really had any adventures in my life. That adventure was the first of many, both small and large. Sometimes, I feel like I have a boring life—but it only takes a second to look back and think about all the adventurous things that I’ve done. Each time, because of risks involved, it is a little bit exciting and scary. 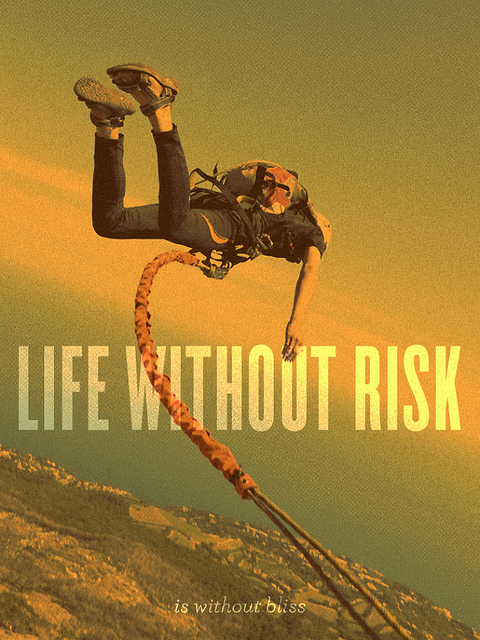 A leap of faith

Sometimes, after weighing the odds, the best thing to do is just go for it. Having faith that things will work out for the best isn’t easy, though. After all the preparation, weighing pros and cons, the only way to know for sure if something will turn out is to attempt it.

Back-up plans may fail. I guess this most easily translates to a community of friends and family. The ‘catch you when you fall’ thing only goes so far. Having the support of those that love you is great, but over-reliance can be detrimental when support fails, and you have to think of other solutions. When you fall, you may fall hard — but, only you can be responsible for you landing on your own two feet.

Paying attention can save you

Risk-taking can be great. Risks can lead you to great things, but they can also be your down-fall. I’m all about taking chances, but I’m also a big-time worrier. I keep myself out of trouble because I think (too much, perhaps) about possible consequences. A few weeks after I went skydiving with my friends, at the same exact skydiving place where we’d gone, a young woman died and another was seriously injured. They, like us, had to go through 8 hours of training/education prior to being allowed to skydive. Apparently, they didn’t actually pay attention during that time, though—so I read in the papers.

A fresh start or a new adventure can be scary—and only so much preparation will be of benefit. I was the last one to jump out of the small airplane, flying over southern Alberta that summer’s day. I could hear the instructor over the radio, in my ear, and knew that my friends had safely landed. I counted to three, let go of the safety bar on the plane, and I was falling. If I hadn’t been paying attention, or gotten panicky when it was time to let go, I might have missed the second or two I had to pull the cord for the parachute. I floated, above the earth for a blissful minute and a half. I let myself relax, enjoy the sight, my adventure, and the feeling that I’d done something that had seemed slightly impossible and scary. Landing on my feet was a challenge, after so much had happened, but I did.