You are here: Home / Interior Design / Beauty and Use: Designer Cushions and the Concept of Function

William Morris, himself a legendary designer, once said that you should have nothing in your house that you do not know to be useful or believe to be beautiful. In many ways, this is the designer’s credo in a nutshell. You can’t put it better.

Effectively, Morris was talking about the different weights of function (usefulness) and form (beauty) that our everyday surroundings are made up of. On his terms, a designed interior should only include an object that is not explicitly useful if it is provably beautiful at least to the person who must live with the interior in question.

Designer cushions, it must be said, are rarely useful. They become an almost perfect example of the idea that beauty must have a function within certain objects, because when you sit on them two things occur: one, you can’t see them anymore; and two, they get bent out of shape so they are no longer as beautiful as they had been.

Also, if you leave them on a sofa it can be pretty hard to get comfortable because the heft and volume of the cushion forces your body out about half a mile onto the flat of the seat. 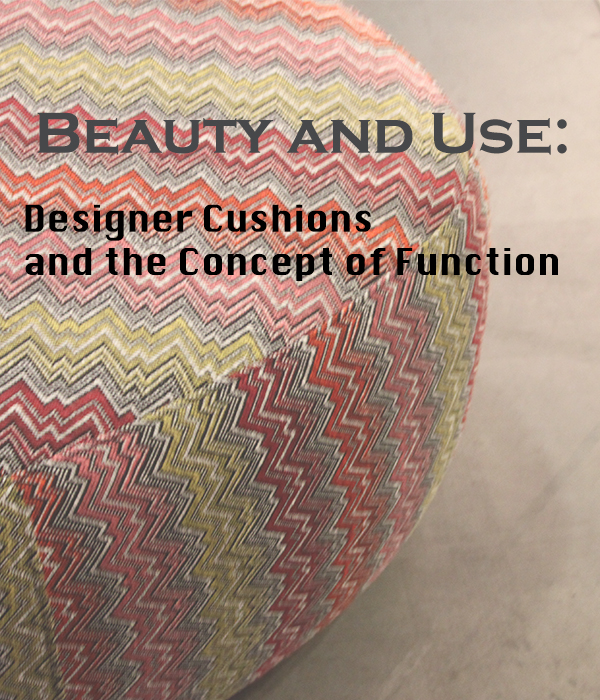 So the question, then, is this: given that a designer cushion is not useful, it must be beautiful yet its original function (cushions are made to make you comfortable when you sit on something) is gone. So does it conform to Morris rule or fly in the face of it?
The basic answer is simple enough. You know it’s not useful, so it has to be beautiful or you’ve got to get rid of it. This avoids a more interesting question, though, which is this: should an object with a clear functional design history be allowed to be rendered absolutely non-functional, in a well-designed home?

There can be no more obvious exemplar of this conundrum than the designer cushion. A cushion, as noted, is supposed to make sitting down comfortable, or to offer a soft support to the back or seat in some way. The designer cushion, though, must be removed before sitting. So what is it? Has it perhaps lost the definition of cushion in much the same way that, over millions of years of evolution, once land-dwelling mammals lost their hands and feet, turning them into the flippers and tail flukes of whales and dolphins? After all, one would imagine that one of the core defining factors of a cushion is its ability to be sat on, indeed its purpose for being sat on

Following the absolute designers rule set out by William Morris, there is no reason why a cushion should not be used in a purely decorative sense provided that its absence makes a room less beautiful than it would have been had the cushion remained. So we must turn our attention to the decorative function played by a once-practical, now purely form-based object. Without it, the contrasting tones of sofas and other soft furnishings may lose their highlight and their anchor. So it stays.