I still remember the day I got my first pair of glasses. I’d been sitting in my grade four class the day before watching a slide-show on mining, from the fourth row in the room. When the teacher asked me (yeah, I was the teacher’s pet) if the image was in focus I kept saying no. It was all blurry to me! The next day, when the doctor checked my eyes, it turned out that my first downy facial hair had been accompanied by major-near sightedness. He couldn’t believe I hadn’t realized there was something wrong—little did he know I spent most of my time with my nose in a book, and as long as I could read print, I thought I was seeing just fine. 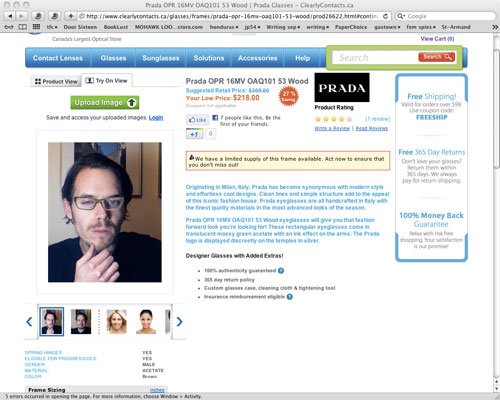 Trying out the Virtual Mirror feature
An hour at the glasses real quick shop in the mall later, I put on my first pair of glasses. They were horrible, like the rear-windshield of a volvo plonked down on my face, I was glass from chin to hairline—but walking through the mall felt like waking up from a bad dream, everything was crisp and hyper real. I still remember too, being blown away by how expensive glasses were.
It was the early days of high-index lenses and anti-reflective coatings, and my Mom was determined that whatever pair I’d get would be a tank. Even in the eighties, I think they topped out over $200 (several hundreds in today’s money).
As the years went on, I was saddled with worse and worse pairs until I finally convinced my parents that my prescription was changing so fast, it would be cheaper to go with contacts. But of course, camping, in the morning or at night, it’d be back to the blinders. When I got a job, one of the first thing I did was by myself a pair of decent glasses—they too, cost more than I’d have liked, I remember it was three whole paycheques to pay for them.
If only ClearlyContacts was around back in the day. Seriously, it’s hard for me not to gush. Tazim and I are huge fans. I’ve used them for contacts since I first saw a promo-code on an in bus ad. . . and Tazim now has several pairs of glasses from them. But I’d always wondered—would lenses in my crazy high and complex prescription still be cheaper, or as good as the ones I get from my local optometrist? I decided I had to find out.
I got my last pair of glasses living in Auckland New Zealand, and I paid through the nose—a little over 650NZD (about $500US). But what really got me about the experience was the fact that, like many opticians, they were ordered from a central supply depot. When I got my new frames, they came in the mail from Hong Kong. Special ordered. My prescription is high, pretty close to the limit, and a little wonky. Like having a strange shoe-size, it’s a genetic curse I hope I don’t pass on to my children.
Armed with a fresh prescription (thankfully my vision hadn’t gotten any worse), and having asked the optician to record my PD (the distance between my pupils, not always included on prescriptions unless you ask—though you can measure at home, or get an eyeglass place to do it, usually for free)—I headed to the ClearlyContacts site.

Rejects
I had an idea of what shape and style of glasses I wanted—I’d popped by a place in the mall to check some frames out—but when I got online. it all went out the window. The prices on the frames were so good, that I found myself looking at the good stuff, rather than—if you’ve shopped for eyeglasses, you’ll know what I’m taking about—the sad pathetic drawer of “value frames.” And, I was spoiled for choice, they didn’t have everything in stock. A pair of really cool D&G ones with actual wood were out, and so were a pair of really old-school black Burberrys that had a great British look. But I could have scrolled around for hours, and still had no idea what to get, except that they also have this ‘virtual mirror” feature.
Maybe calling it a virtual mirror is a little far fetched. The process is, you upload a phone (or use the site to take one with your webcam), then they superimpose a cut-out of the glasses over your face. My first attempts to use it were complete disaster, it clearly tells you, at one point, to drag to points on the screen over your pupils, but without my glasses on, I didn’t bother to try and read the not-so-fine print.
But, once sorted out, it worked a treat. Obviously it’s not magazine-front-cover photoshop, but what I like was that it gave me a good idea of what shape the glasses were head on—and how they’d match the shape of my face. A pair of young John-Lennon esque ones made me look like my creepy gradeschool librarian, a pair of huge aviator style ones were as bad as the ones I’d had as a kid, but this acetate pair that I stumbled across, with a vaguely retro shape (I dig the old–school arms), didn’t make my head look like a watermelon, or an ice-cream cone. Sweet victory.
When I order contacts from ClearlyContacts, they usually come in a couple of days. Unsurprisingly, probably because of my Superman-powered prescription, I had to wait a few days longer for my glasses. But, when I got them, I was more than satisfied, the antiglare coating is as good as any, and so is the perscription—I even had them checked out by the optometrist. So—they’re like any other pair of glasses—but between you and me, they were less than half the price.
________________________________
Check out ClearlyContacts‘s Virtual Mirror feature. I received a pair of glasses form ClearlyContacts in order to check out their Virtual Mirror feature and to conduct my review. I was not compensated in any other way.