You are here: Home / Organization / Organizing Magazines — Beautiful or Useful? 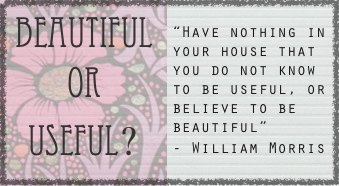 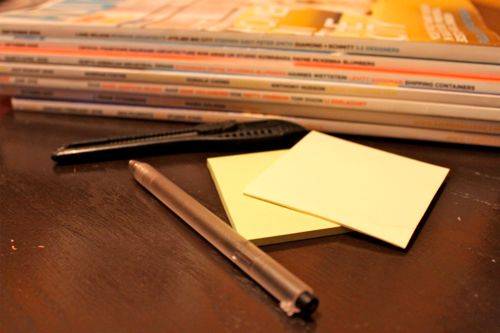 We have, what seems like, hundreds of magazines. We’ve moved years worth of magazines to over 6 places—and we’ve had enough!

As a part of our moving process, and general down-sizing, we’ll be getting rid of almost all of our magazines. Why do we have so many magazines? Well, we don’t really buy fashion magazines very often, so most of our magazines are design or décor related. We enjoy looking back on these magazines for home ideas, or at least we would if we actually had room to store them in a place where we can actually take them out and look at them.

Actually, we don’t really have room to look at them period. Our actual dining table  is under a bed, and our round one is squished in such a way that it isn’t very accessible. Oh the problems with living in a tiny apartment and having lots of stuff (and lots of hobbies that require stuff)! Anyway, magazines are heavy and take up a lot of shelf space, plus we are moving toward a more paperless house. 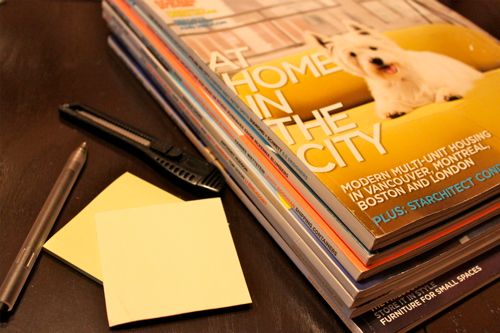 Tools we used: post-it notes, a pen, and a box-cutter.

Why we did it this way: We had hundreds (it seemed) magazines to get through, so we needed to be ruthless. Instead of writing down ideas as we went through the magazines, we cut out pages to scan later or post-it noted to come back to the pages to just write down a few resources, sometimes post-it noting, writing what we liked about the picture.

The goal for this exercise was to recycle or donate as many magazines as possible. We haven’t yet finished this project, but we got through at least 50 magazines, in order to be able to clear room on a bookcase for building construction.

Magazines might typically be thought of as useful, especially when you have magazines that can be thought of as resources. However, the resources can be copied/scanned—the entire magazines, with ads and information you might not care about, don’t need to be kept. The few magazines we will be holding on to are the beautiful ones, the ones that are like books. We’ll be holding on to our old Nest magazines (which are book-like) and our old Artforum magazines, which were costly and informative. I haven’t yet read all of them and they are directly related to my field. I guess you could say that the Artforums are both beautiful and useful and the Nest magazines are just beautiful, each one with a differently cut-out page, so the entire magazine is like a work of art.

One of the things I am most excited about with having my new iPad2 is being able to easily read digital magazines! I have an e-book reader for books, but have always wanted to read magazine and .pdfs on the go. All the pages I’ve scanned in from magazines we’ve recycled, as well as the free magazines and articles I’ve downloaded, plus the digital magazines I’ve subscribed to, are all easily accessible on my iPad2. I like to use Zinio for paid subscriptions (and many I’ve received for free) because you can access your magazines on any computer, in addition to many mobile devices. This is great, because, unlike paper magazines, you can have hundreds of magazines at your disposal at any time. Zinio is also great because you can buy single issues or entire subscriptions, and there are always free magazines and special issues available to check out.

We were able to donate a large amount of old magazines in the past, by posting an ad on craigslist, but with this batch of Natural Home and Azure magazines we tore out too many pages to really donate the magazines to anyone.

Do you buy magazines? Do you usually store them or get rid of them right away? How do you decide what to keep or toss? Do you have tips for organizing magazines?