The first juicer I ever used was a screaming behemoth, by the time I lifted it onto the counter, had my veg ready and flicked the switch, I was already a bit daunted. And then, what seemed like a dozen carrots later, as I enjoyed my half-cup of juice, I tried to smile and really enjoy it, because I knew I would be spending the next half-hour cleaning up the mess I’d made procuring it. I’m sorry giant juicer—it just didn’t work out. I returned it, and while I still really liked the idea of juicing, I felt like the whole process just wasn’t for me.

Which is why I was a little skeptical when I unpacked my JuicePresso (Which is a pretty clever name for a product, I think). I hefted him up onto the counter, and checked him out for a while. I decided I liked the cut of his jib—a design that makes him look like the offspring of a blender and a Dalek—the robotic-trash-can monster from Doctor Who. We made friends as I “assembled” him, by which I mean, popping the drum on the base, popping the ‘extractor’ into the drum, and putting the hopper on the top. 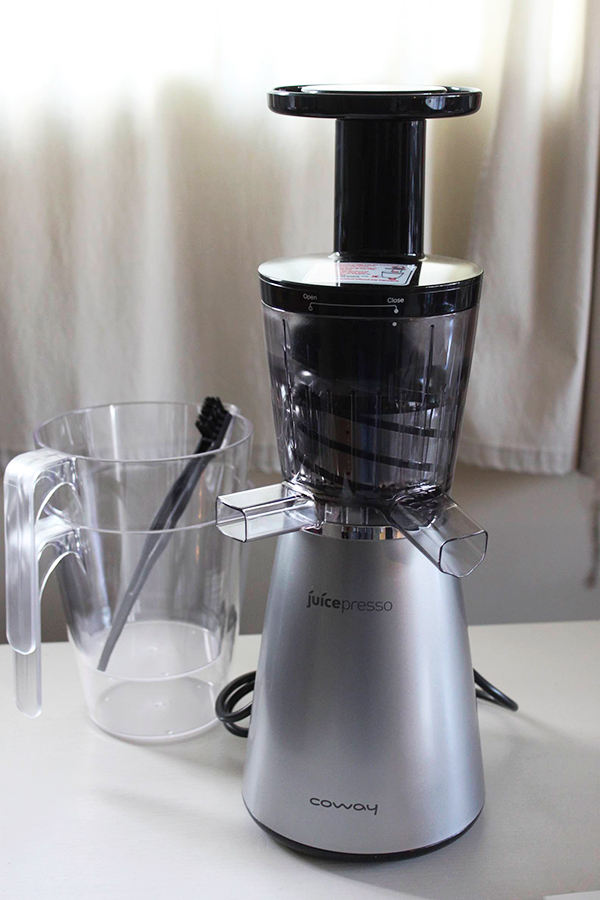 It was easy enough, so I gave juicing another whirl—and I’ve come to three conclusions:

1 The other juicers I’ve used have been glorified blenders, with bladed attachments that use high speed to attack fruit and veg and to swish it against a sieve—the JuicePresso is a ‘masticating’ juicer, and takes its time. A screw valve catches the fruit or veg and works away at it, slowly grinding and squeezing out the juice. The whole process isn’t noticeably slower, but it is quieter. Much quieter.

2 And less violent. JuicePresso and other masticating juice extractors say that using a slow, cold extraction method means less lost nutrients and taste—it’s like the difference between cold pressed virgin olive oil, and the clear discount stuff. What I’ve noticed is that the taste of the juice is incredible—rich and full, without being pulpy or gross.

I also get a lot less of what the pros call ‘pulp’ and what I call squidgey gunk with this juicer than with any other I’ve tried. For me, this is a big deal, because it means I’m throwing away less expensive produce.

3 Cleaning it isn’t so bad—if I remember to do it right away! There are two big improvements in cleaning the JuicePresso over others I’ve tried. 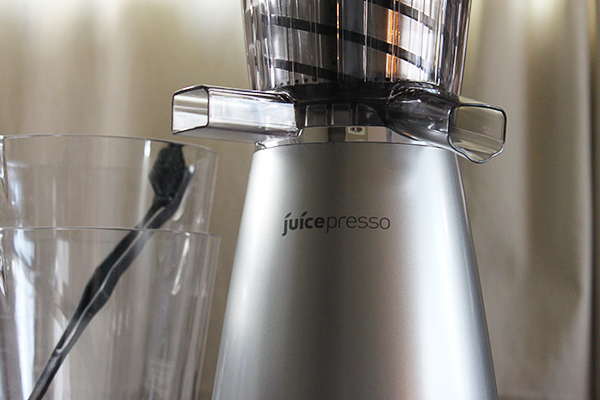 The first is that there is no scary super-blade thingamajig to cut my hands on. Which, let’s face it, if there is a sharp many-bladed-thing, it is inevitable. I will cut my hands on it. It will hurt. I will whine about it.

The second part? Fewer pieces (three) that come apart pretty easily and rinse clean with cold water. If I’ve been juicing something like carrots, the mesh on the squeezing screw gets a bit of a scrub with the included brush (though a kitchen scrubber would work just as well)—and that’s it.

In all, I’m really happy with the JuicePresso, and I’m going to be adding it to my morning routine. Juicepresso mentions that the juice extracted keeps for 2-3 days in the fridge—losing less nutrients in storage because their extraction process leaves more there to start with—so far none of my juice has lasted that long (because I’ve finished it before day 2). 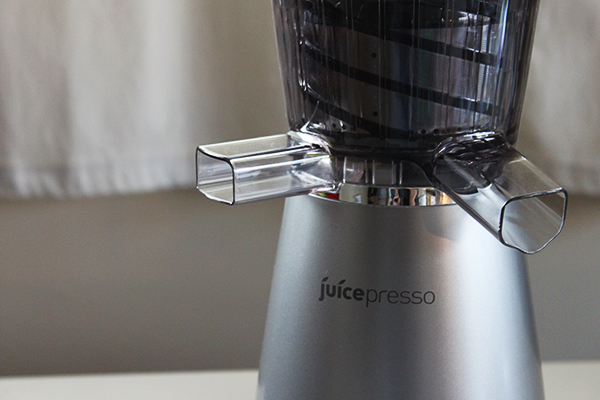 If you’re looking for a Mother’s Day gift for the health-conscious—I couldn’t recommend it enough.

I’ve been trying out my JuicePresso, which I am so happy to have been sent to write this feature, and will be sharing some of my favourite recipes in the next few months as I try to make new things. You can pick up a Juicepresso CJP-03 Cold Press Juicer
on Amazon.

Previous Post: « The Perfect Cold Weather Travel Companion
Next Post: Spruce up your Bathroom with a Speed Connect Faucet (with Giveaway) »