You are here: Home / Kitchen / A Pressure Cooker Bestiary – Part 2

Obviously, because they are more complex, and are built to stand up to higher heats and greater pressures, pressure-cookers are more expensive than regular pots of equivalent capacity. There are three mechanisms, and two basic material types found in stove-top pressure cookers on the market today. The combination of these, as well as over-all build quality will largely determine the product’s cost.
There are three basic types of pressure mechanisms on the market today:
Weighted, Developed Weight or Sprung Valve, and True-Sprung Valves

Weighted pressure cookers are just like the old one that my Moms had, or that her mother used. They really haven’t changed a lot, but they have been made much safe by the development of fail-safes. Most pressure cookers are now safety certified and have three fail-safes, typically the first of these is the ability to rapidly vent steam from the weight without launching it into the air (newer weights ‘click’ on to cookers), a second valve integrated into the lid designed to release steam at a pressure well below the stress level of the pot, but above 15 psi, and finally a “hole” in the rim of the lid that will allow the pot to blow a gasket before blowing it’s top.
Weighted pressure cookers are pretty self-explanatory. There is a steam vent that get’s plugged by a weight. As pressure builds the weight restricts the release of steam. Older versions used to rock, today’s just lift a bit and release a steady gust, while some of those in India rock—then whistle!
Representative Brands: Presto, Futura, Lagostina, T-Fal. 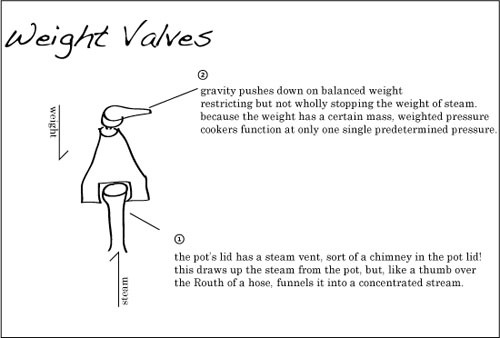 Developed Weight
What this style has in common with weighted valves, is that in both cases, the pots are based on a principle of restricting steam emission, but not wholly stopping it. In developed weight cookers, there is no external attachment placed on the unit, but rather the weight is integrated into a sprung mechanism directly over a vent. Once pressure is reached, the spring’s resistance is overcome and the weight lifts, so a gentle puff of steam is emitted from the cooker. There is much less steam emitted, and less fiddling—than with externally weighted pressure cookers. It’s easy to maintain but not lose pressure—however, the pot is not a wholly closed system.
It should be said that this has some advantages— these pots are easy to monitor without close scrutiny, and nearly all models function at at least 15psi.
Representative Brand: Fagor 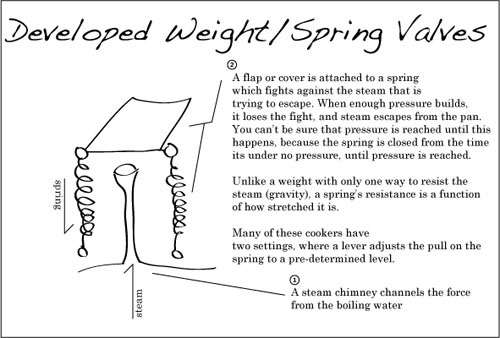 Sprung Valve
In the final category of pressure cookers are those which emit no steam at all while at pressure. These cookers operate using a mechanism integrated into the handle, where a piston, controlled by a spring, slowly rises as pressure builds. The rod is externally marked, generally by a series of rings. As a result of the fact that no steam escapes, these are the most efficient cookers.
The downside to these cookers is that you have to watch the indicator and adjust the heat to an appropriate level. If you have a cooktop which only functions at certain intervals (for example and induction cooker with 5 distinct settings), none of the temperatures your burner can put out may correspond to the amount of heat the cooker needs to stay at pressue. This is a pot that needs to be watched—at least until equillibrium is reached. (Note that it’s never a good idea to leave a cooking device unattended!)
Representative Brands: WMF, Kuhn Rikon, Fissler 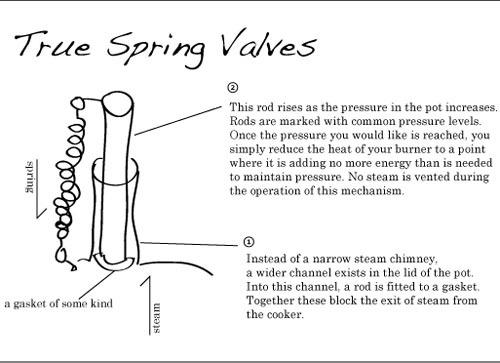 Materials Choice
While generally only found with old-fashioned weighted mechanisms, the majority of pressure-cookers on the market—at least in Canada—are still aluminum models. These can be purchased at pretty much any big-box store, and over the years, I’ve had a few. Aluminum is a good conductor of heat, and these models are quick to heat up and cool down. There is a little more heat-loss associated with this, but the biggest disadvantage is that you’re stuck cooking on aluminum, which reacts with acidic foods. These means pretty much anything with tomatoes is out!
In addition, the build quality on these cookers is generally not as fine. Under normal conditions, an aluminum pressure cooker will still likely last longer than you, however, because of generally cheap construction, these pans are not appropriate for braising or frying. Caramelizing onions or braising is going to have to be done in a separate pan.
To avoid these hassles, if you can afford it, I suggest purchasing a stainless-steel model on your first go ’round. Still, aluminum cookers can be had from $25 to $50 in 6 litre/quart or smaller capacities. I honestly suggest looking at your local asian market if you are looking for a bargain—but check to see if they’ll honour or facilitate warranty repairs, or can hook you up with replacement gaskets. You may even find yourself with a whistling model, which use a weighted mechanism but emit sharp steam-whistles when at pressure and about every 3 minutes thereafter.
Stainless steel pressure cookers vary just as much as regular pots in terms of their sandwich composition, wall thickness and overall quality—but, because of the stainless steel, all models are non-reactive. You may even find a cooker in your preferred line of cookware. Because of the variety of stainless steel pressure cookers on the market, it’s almost impossible to suggest a price range. In general I’d expect to pay <$100 for a weighted model, but more than $150 on a sprung valve cooker.
Most of the stainless steel cookers I have seen have a decent sandwich attached (bonded layers of copper/aluminum at the base of the pot to conduct heat), but give thought to what you’ll be using your pressure-cooker for. If you can make it do double-duty as a stock/pasta pot, it’s one less item cluttering your kitchen, and it’s nice to be able to brown and cook in the same pan.
Whichever stainless model you select, consider whether or not it is compatible with induction cook-tops, which are becoming increasingly common—and an ideal way to cook under pressure! (My energy costs have gone down significantly since I began to use this combination of devices).
Nearly all pressure cookers—save for some larger canning models which bolt together—are sealed by way of a gasket. Most of these are quite similar, but I’ve yet to come across a manufacturer that says that whatever your local hardware store sells will be just fine. A final material related concern is the durability and ease of finding a replacement gasket. Expect to replace yours every year, and be happy if it lasts longer.
Sizing a Cooker
People that use a pressure-cooker a lot may have more than one for different purposes. Increasingly, manufacturers are making their pots the same diameter so that you only need to swap out the lid to swap pressure cooker sizes— but what is a good size for a cooker?

Pressure cookers are generally pretty large—the reason being, that depending upon what you put in them, you can fill them only 1/2-2/3 full. Certain foods, such as legumes,  tend to froth as they are boiled. This froth can rise to the top and clog valves if there is not enough headspace in the cooker. Most models recommend a maximum filling of 1/2, or even 1/3 if you are cooking these foods. Even if a food doesn’t generate excess froth, the cooker needs some headspace for steam to form and build pressure—1/3 of headspace is sort of the industry standard. A general rule of thumb is to multiply how much you’d like to make by 2.
While a 4 litre pressure cooker would likely accommodate nearly all uses, most recipes are sized for the popular 8 litre capacity. A 8 litre pressure cooker=5.25 litres of soup, a large enough quantity for most of us! Even a six litre pot will accommodate a large steamer basket, or a fair sized insert. Being able to put an 8″ springform pan in your cooker is a real benefit so that you can prepare foods like cheesecake!
Because these pots do not lose moisture and maintain a uniform internal temperature when at pressure, over-sizing is not much of an issue.
That being said, I would say that sizes 10l and up are much too large for home use. These pots are quite heavy, and are difficult to manoeuvre and store at that size. The real application of these capacities is in pressure canning, a whole different ball of wax!
Most of the time I’ve followed this advice and bought a 8l (or quart) pressure-cooker. I finally have a second 4l model and I love it. I think I will be using it much more often than its big brother, simply for ease of washing up. Honestly, I’m considering a second small cooker for when I’m making multiple Indian entrées. We’ll see if the environmentalist in me, or the materialist, wins out!
Have I missed anything essential? Got an opinion? Drop me a line!


Post by Greg West, a new regular contributor. The third part of this exciting series will be up tomorrow, so do check back in! Did you miss the first part? Click here to catch up!