You are here: Home / Archives for Philadelphia 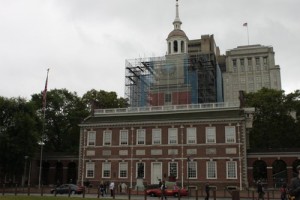 We'd originally planned on being in New York for longer than the 5 days we'd ended up spending there, but we decided to stop in Philadelphia for a day by way of Atlantic City. Having always wanted to visit New England, I was excited to stop in Philadelphia, if only for 1 night. It turns out that accommodation in Philadelphia is much cheaper and better value than that in Washington D.C. and New York, and given the multitude of attractions and veg restaurants to check out, we plan on going back ...

END_OF_DOCUMENT_TOKEN_TO_BE_REPLACED

It's hard to believe that we'll be heading back to Canada next week—to our new/old home in Calgary. Our stuff won't arrive until early October, from Vancouver, so we'll be living out of suitcases for a while longer! This month of travel has been amazing, but I look forward to seeing my family and digesting everything we've seen and experienced. I have a lot to share with you, since we visited so many places—but we aren't done yet! We will be spending 5 days in New York, staying in a sublet in ...