You are here: Home / Kitchen / A Tale of Two Cookers – Under Pressure Part 3

Under Pressure Part 3: A review of the Fagor Duo Combi Package
It all starts in winter in Berlin. Imagine strolling around with a bit of a shiver. Last night you were in Rome. Now despite jacket, vest, and scarf, the sudden change to Northern latitudes has given the wind teeth. You should be soaking up the sights, you’re aching to go to the Berlin Ethnographic Museum, but the real ache of knuckles, toes, and nose, drives you to find some heat.
You pop in a shop and find yourself in cookware heaven—otherwise known as the flagship WMF store on Ku-Damm. There’s sparkling cromargan steel all around, friendly staff, and a demonstration underway. (It went something like this).
It was on just such a night that I fell in ardent love with the WMF Perfect Ultra Pressure Cooker. The Ferrari of pressure cookers, it’s stainless steel, induction compatible, true-sprung, and features an integrated timer. Unfortunately, like a Ferrari, it was out of our price-range.
So I went home full of ardent and unrequited love. In a move to and from New Zealand, we’d passed-on two different decent cookers, and ended up with only our gargantuan 10 litre aluminum one in the house. I’d been meaning to get a new stainless steel pressure cooker for a while, and now I became obsessed—flipping through issues of cook’s illustrated, talking to cooking friends, pouring over cook-books and internet archives. The long of the short of it? 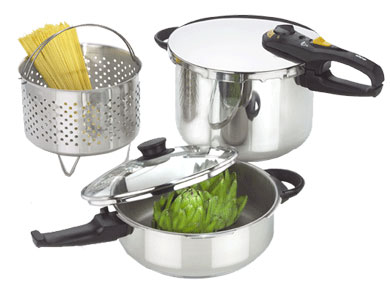