You are here: Home / Kitchen / Under Pressure: Part 1

Why You’d Want One
It’s time for a confession. I’m a bit of a pervert. Where your summer cooking kick might come from barbecue, picnic lunches, or campfires, for me summer is the season of pressure-cooking, ice-cream, and pies. I grew up on the prairies, where cold winters pay off with hot-hot summers and longs days. When it’s 40º C outside and no-one you know has air-conditioning, how the hell do you put a meal on the table without roasting inside?
I know other people eat a lot of sandwiches, but since I tend to make my own bread, it’s not really a heat saver. And barbecuing is great if you have the yard, but if you’re in tight quarters or are carless (easily transportable forms of fuel having a big environmental and wallet impact up here where it’s hard to recycle mini-propane cans); it’s not always an option.
And well—soup in the summer is heaven. I know for a lot of people it’s a winter thing, but for me it’s a practical way to go through all the produce I pick up. At the farmers market last wednesday we bought pounds of tomatoes, fennel, onions, potatoes, garlic, spinach, broccolini, peppers, carrots—the list goes on. Lunch today? Fennel-lentil soup, ice-cold water, salad with tahini-garlic dressing, and cherry ice-cream at the end. I feel like an infomercial here— but the soup took 11 minutes to cook, and maybe 10 more to prepare.
Normally, that hot pot would be on the stove for about an hour. I’d have to stir frequently, watch the pot, and put up with all the insane heat the burner would release into my apartment. Now, pressure cookers are about more than just soup, but I think it’s a pretty great example about their heat efficiency.
I’ve been in love with pressure cooking since childhood, when my Mom would lug this mythic beast out of the cupboard with an air of trepidation to cook up a tough cut of meat,  or to make stew when errands had taken too long (I’m vegan now, but still admire my parents for buying the whole cow direct and using all of it). For a kid something a little magical, and seemingly dangerous, definitely equates with something cool. When I became a self-righteous ecologically minded hippie-wannabe, my love affair got a little bit deeper. I remember checking out “Recipes for an Ecological Kitchen,” by Lorna Sass, circa 1992, and being blown away by the preface, where she talked about the philosophy of a kitchen with just a pressure cooker and a frying pan. I’m far far far from that vision, but when I’m living on the road, those two items are always the first two buys for the kitchen, so her book must have had a deep impact on me.

When I fell really in love with pressure cooking, my Mom was a little bit terrified. Like many others she’d experienced the apocryphal pressure cooking exploding anecdote first-hand. Something of her mother’s all over the kitchen, lid—so the story goes—having struck the ceiling and even sticking for a while. Yikes! But, her little Presto cooker was of a newer generation, and I never had a problem.
When I moved out at 18, one of my first buys was a pressure-cooker to call my own. It wasn’t fancy, but following a tip from a friend I headed down to China-Town, where I found a three-times-fail-safed aluminum pressure cooker with a weighted valve for $30. It worked a dream, and I only inadvertently left it behind in a break-up years later.
I don’t think a pressure cooker is “essential” if you’re not going to use it, but man— if you get one and try it out, I’ll bet you’ll wonder how you lived without it. And, if you’re vegan, vegetarian, or just eat a lot of beans, your pressure cooker will likely pay for itself overnight and help reduce your ecological footprint from the get-go.
What’s behind the magic? Just water and heat.
You can’t cook “dry” foods under pressure, things have to either be boiled, or steamed (pressure fryers being an exception). In pressure cooking a re-enforced pot, designed to accommodate a certain amount of force, is filled with water. Generally a minimum of 1/2 cup for smaller models, and to a maximum of 2/3 full for non-frothing foods. When the water boils, at 100º C, it releases steam as it turns into a gaseous state. Without a pressure cooker, the water will never rise above that temperature (alright, this is a bit of a lie, the reason salt is added to pasta-water is in part to allow a higher temperature, and the temperature of boiling depends on altitude). However, under pressure, temperature in the pot continues to build. Depending on the pressure capacity of your particular model, this can be up to a 20% increase in temperature. In addition, the pressure has a direct tenderizing effect, breaking down tougher foods.
When we cook in an open pot, we allow heat to escape in the form of steam. Almost all of us cook soups and stews in that area between simmer and roiling boil, and every bit of steam that is produced is heat lost from your pot (and sent into your home).
When cooking under pressure more heat stays in the pot, and you are cooking for a shorter time, without needing to put much heat back into the pot. Pressure cooking offers dramatic energy savings. The number frequently bandied about is 70%  It get’s better—because little water is evaporated, you use less water, a consideration in areas where potable water is scarce, such as boating, or camping. In addition, because pressure cooking allows you to reach higher temperatures, a wider array of bacteria are killed.
These energy savings are a big deal. In fact, when we spent some time in India, where cooking fuel is a more dramatic portion of food expense, pressure cookers are incredibly common, despite still being more expensive than a garden-variety pot. 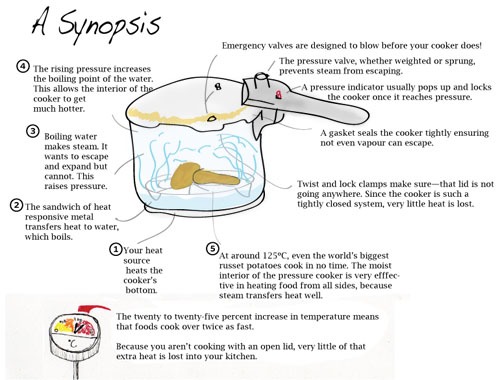 Are you sold yet? Next up, some general information about kinds and styles of pressure-cookers.
Do you own a pressure cooker? Have  you used one? Please leave us your comments, we would love to hear from you!
Post by Greg West, a new regular contributor. The second part of this exciting series will be up tomorrow, so do check back in!
Here is the 2nd part of the series: A Pressure Cooker Bestiary