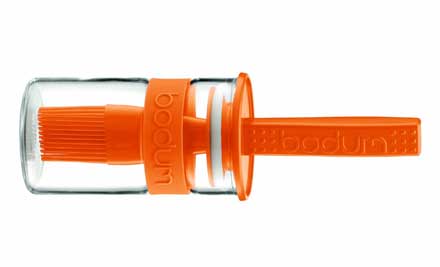 Alright, alright, we have a couple of heavy cast-iron pans on our deserted island kitchen list already—clearly we’re going to get a work-out lugging our stuff there! Sadly they would be absolutlely worthless without some oil and a brush. It’s true that when seasoned these pots have top-notch release, but stuff is still going to stick without a little grease. We don’t really have anything against a little fat in our diets—the average person needs 60g a day, and as vegetarians, that’s a number we have to reach for—but we don’t like our food to be swimming in oil either.

That’s where a brush and an oil-pot comes in. We’ve written about this before, but the long story short is this: get the pot hot hot hot. Brush a thin film of oil on it, and then cook right away. And you’re golden, crêpes will roll themselves off your crêpe pan, and noodles will char just right (as long as you rinse off the starch before you throw them in).

We love this set from Bodum—the base is thin but strong birosilicate glass, so the oil won’t eat away or absorb any plastic, and the brush itself is sturdy dish-washer proof silicon. Plus it comes in a neat shade of orange. Orange you glad you aren’t being shipped off to a deserted island? Packing is tough.