We bought our first cast-iron wok in Chinatown many a year ago. It was straight up pig-iron, came pre-rusted, and cost less than $10. Once we got it seasoned, it worked alright. Then one day a move from gas-burner top to stainless steel counter turned out to be too much of a shock, and it split with a thundering crack. We looked at the wreckage of a Thai curry, watching delicous red curry gravy pour all over the counter like magma, and vowed we wouldn’t be quite so cheap in seeking it’s replacement. 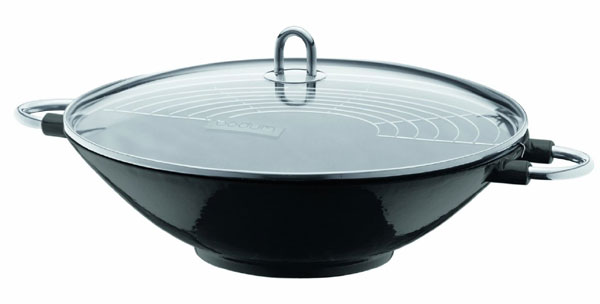 Six years later, I think it’s safe to say we made a good decision in buying one of these woks from Bodum—it has a glass enamelled interior with a coarse surface, that protects against rust, but seasons up just like naked cast iron. Now, a lot of other major cast-iron names make their own version, including the venerable Le Crueset. I suspect we’d still pick the Bodum, it’s cheaper—and it comes in prettier colours.

Cast iron woks are fantastic because they heat to roaring hot, and build up a patina over time that releases a subtle flavour to your food. Maybe that sounds gross—if you wanted, you could easily scour away any coating that developed—but real chefs know that the ephemeral phenomenon known as Wok-Breath adds life and delicious to anything you cook. Properly seasoned, a cast iron wok also allows you to cook with little or no oil, which means more healthy grilled delicious flavour, and less fried mush.

Make no mistake, it’s a beast to lug around. But we do. And yeah, we’d drag it to our deserted island. If nothing else, lugging it there would contribute to our beach-bodies. (From $60 on Amazon)