Tazim and I never consider ourselves road-trip-ready without a playlist—but when we bought our new-to-us ride, the stereo was a sore point.

Whoever had bought the car originally had sprung for the limited package—we could see the upgraded speakers all around us, and knew they were fine—but the head unit was low-spec. Having an in-dash 6 CD player seemed kind of cool—until we found out that it wouldn’t play anything burnt at home, or CDs that were the least bit blemished. Worse, it put out a muddy output that made our tunes sound more like my first Fisher Price cassette player than digital audio, and there was no way to plug in an MP3 player (the radio wouldn’t even pick up the FM from our iPod adapter.) It was clear that something had to be done.

Thankfully, after hours of research and advice from car-audio-install friends—we found a unit we thought would work well for us, the Kenwood DDX319. 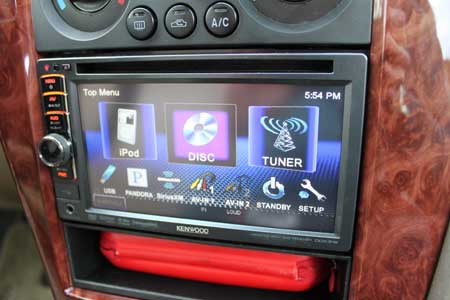 At $349 MSRP, often less on sale, it was also the cheapest double DIN deck with support for video (what’s double DIN? Check out ‘size’ in our glossary below). Why video? At first we didn’t know either—and then we fell in love with the way the large-touch screen display facilitated navigating our media on the road—and we were smitten with the idea of adding a back-up camera to help in tight parking situations and to see if the neighbour’s kid left their bike behind our vehicle (like always).

We really like both the aesthetics and the ergonomics of the unit—there are enough physical buttons to be helpful, but not so many you’re left squinting and confused.

Instead, in-depth functions are handled by the touch-screen, which is much much better than trying to control your mp3 player or pick songs off a USB stick from a mess of switches and knobs (basically, you turn on the unit with the buttons, use the knob for volume, and can ignore them the rest of the time). The touch-screen interface isn’t bad either—as far as these things go. Though I read manuals obsessively, Tazim had a go at using it blind, and never needed to refer to it to figure anything out. Of course, figuring out some things—how to change the desktop picture or activate the aux-in—are trickier than others. 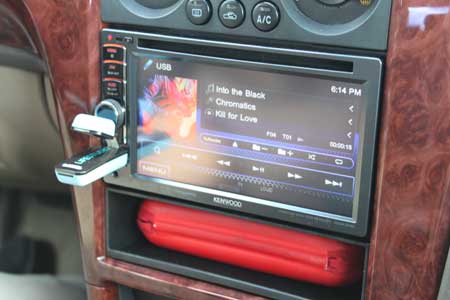 We love how well the DDX319 works with media from USB, it loads albums and track quickly, and parses current ID3 tags with ease—so that things like the band, song title, and album art all show up. Adding media to the USB is as straightforward as drag and drop, but there are a couple of caveats: first, if you organize your music into folders by arts and album, it’s impossible to shuffle between them all, and second, the media shows up in order of the date the songs were copied to your USB drive rather than alphabetically, meaning that you may have to scroll around a little extra when you’re trying to find a particular track. Kenwood does provide windows-only download software that can sort this out, but as Mac users, we haven’t tried it.

Better still is the way the head unit integrates with iDevices, of course, with any iPlayer it gives you access to all of your tunes—in fact, it does this pretty well—but if you have the A/V cable (an optionaly extra) you can also mirror the iDevice screen to the unit’s for many applications. This is really cool because it extends the use of your deck and speakers—for example, if you have Garmin’s Street Pilot On Board app, you can use your iPhone to turn your 319 into an in-dash GPS. Of course—your navigation is only as good as your data plan, so it doesn’t work in all cases.  You can also use Kenwoods App mode to play Netflix videos and other content while you’re parked. And, with an iPhone plugged in, the head-unit piggybacks off your data connection to play from Pandora, which is actually supported from withing the 319’s default interface.

Finally, the other features of the unit work exceptionally well—DVD playback is a no brainer, though of course it only plays video while your vehicle is parked, the tuner is clear and locks on to signals well, and the device is easy to live with. It remembers what you were doing last, and starts there. It doesn’t freak out if something is suddenly unplugged—and inputs and outputs are clearly labelled and perform as expected. The USB port even charges all of USB devices we’ve tried plugging in (with the exception of the iPad). The rear input on the unit, suitable for a back-up camera, uses standard composite inputs and is not proprietary to Kenwood. The 6.1″ screen is clear and bright, with a resolution of WVGA (800*480, more than adequate for its size). And the audio is clear and loud, with a six channel output and an RMS power of 22 watts (more than adequate for most applications, perfect for souping up with an extra amplifier for those looking for big sound). Installation of the 319 is straightforward—but as with all car stereo installations requires a harness to match your specific vehicle, and is best done my someone with experience. The 319 does have support for steering wheel controls, and even features colour adaptive lighting so that you can alter the back light to match your vehicle’s interior.

We’d gladly recommed it to anyone looking for an entry level unit—though those looking for bluetooth connectivity would likely be happiest with its big sister, the DDX 419 ($50 more). 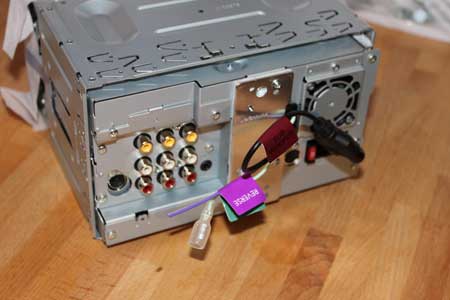 When we went to the store unit to pick one out, our jaws dropped to the floor. There’s so much out there, we were totally overwhelmed.  If you’ve never bought or installed a car stereo, it can all be a little intimidating. Here’s a short primer:

The head unit is the brains of your stereo, it’s an amplifier and a component all in one—the thing with the radio, and that you stick CD’s into. Often there are other things that plug into it: perhaps a CD changer in the trunk if you’r old-school, or maybe a component input for a backup camera.

Car stereo head units come in two main sizes, single, or double DIN. DIN (aside from being a general hubbub or a bunch of background noise), is a nonsense acronym from Europe, that just refers to whether the stereo takes up one or two standard sized bays in your vehicles dash (about 7″ by 2″ for a single DIN). It’s almost always cheapest to match the size of what’s in your vehicle. But, for obvious reasons the double-DIN size is preferable for video applications.

Most of us are set with the amplifier integrated into the head unit, but it gets a little confusing, because you can choose to add an amplifier on, or will sometimes get a car with more than one amplifier. Why? So that you can deliver neighbour annoying window shaking bass from really big speakers—and also because as music travels from your head unit to your speakers through wires, it can loose some of it’s oomph. Additional amplifiers can scrub any cobwebs out and give the sound a boost. I wanted a billion watt amplifier in my car when I was 16. I don’t anymore.

Head units seldomly come packaged with speakers—and usually there are some in your car. Talk it over with your bank account or your partner before you decide to upgrade speakers, as unless you’re doing the install yourself, costs add up quickly. That said—if your car has the factory low end inside—often the speakers are terrible, and the Achille’s heal of car audio. Refer to a site like crutchfield.com to make sure the speakers you have in mind will fit into your vehicle—sizes vary hugely!

There are roughly four types of speakers out there: two way/dual cone speakers are the most common, they generally have two cones loosely designated as a woofer for bass, and a tweeter for treble, integrated into a single unit; three way speakers add a mid range component to deliver crisper audio across the spectrum; component speakers need an amplifier that supports them, but work like a home theatre set-up, where each speaker is designed for a separate function and place; finally there are sub-woofers which can be added on to any of these three other systems to anchor the bass. If you’re not looking to spend a fortune, our suggestion is to match your original install, or move from two-three way. While adding on a subwoofer is appealing, consider where you’ll put it before you decide to go this route—in fact, those looking for better sound quality would be advised into looking into extra tweeters instead.