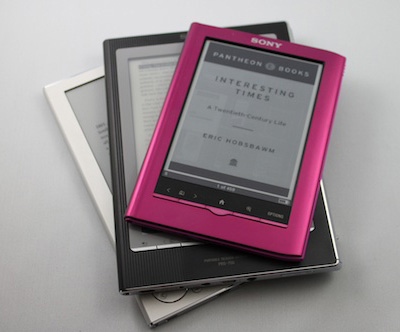 I think it’s safe to say that we’re a household of booklovers. With over one hundred feet of linear shelving in our apartment, plus more  books in stacks of boxes, we sometimes feel a little like we’re squatting in a library. From rare signed first editions by literary greats, to battered genre fiction paperbacks and beautiful coffee-table books that only a giant could fit on their lap—our books are both our metauniverse and paper memory. Giving them away or leaving them behind has always seemed unconscionable. Whether we were off in India or New Zealand, leaving them behind has felt like the absence of a limb, or a lobotomy.
Our first E-book reader was the Sony PRS 505. Released in Canada in May of 2008 (only the second reader officially supported and available in Canada); I was at the Sonystore the very first day, with a flutter in my heart and credit card in my hand.
Honestly, I wasn’t sure what to expect. But it wasn’t a great love like this. I thought it would be great to have for genre fiction, or for novels to while away long train rides, perhaps even to read the occasional journal article without having to print it off. But from my first full weekend with the reader I was smitten.
With a button press or two I could move from Phillip Pullman to Milan Kundera, or from Marx to the latest essays from Antiquity. I loaded it up with not only fiction, but also fact, its ability to read everything from a text file to .pdfs making it the perfect repository for trip itineraries, phrase books and lists.
Within a month or two, we were making trips to our favourite used book store to sell our paperbacks, and all the hardcovers we weren’t sentimentally attached to. Unlike the Kindle, which still uses a proprietary file format, the Sony Readers accept a wide variety of media. Because of this, we were abe to use the funds to aquire books not only from the Sony Reader Store, but also from the countless ebook merchants online. Sturdy and with more expandable memory than I could possibly fill, I still have and use my PRS 505 everyday. Three years and several continents on it still runs great.
In the interm, I’ve used other readers, but none of them quite stacked up. Shortly after purchasing our first, Sony released another product. The PRS-700 was one of the first touch-screen readers, and it also had an integrated light. As soon as it was announced I placed a pre-order, as a gift for Tazim so that we could both go digital. The 700 was a beautiful product, dark black and metal all around, with heft and presence. Unfortunately, the electronics running the touch screen made it heavy, while the touch-screen overlay and light-wedge style coating on the screen made its text less clear than the display on its predecessor—and displaying text is what an e-reader is all about. I wondered if a touch-screen reader would ever become a practical reality, until we tested out their newest model, the “Pocket Edition” PRS 350.
Like previous generations of Sony Readers the Pocket Edition feels like a quality product. It has a metal exterior with a grippy finish at the rear that lends the reader heft, without making it too heavy. The smallest and least expensive product in the Sony line-up, it’s super-portable. The 5″ ‘Pearl’ e-ink screen takes up nearly the entire front of the device and delivers crisp, high-contrast text, and the electronics driving the touchscreen are completely invisible. Compared to the cheaper Nook, or even the Kindle, is like comparing first-class to economy. 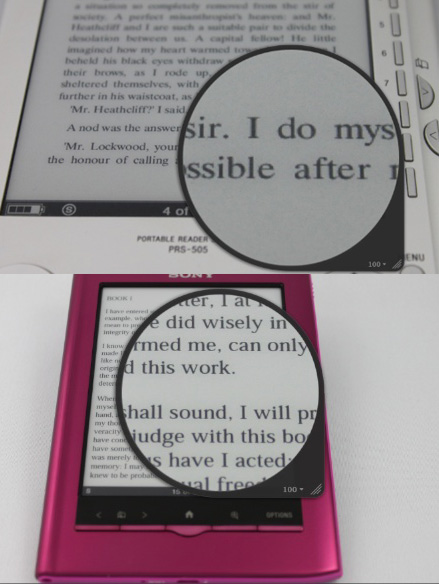 Why a dedicated Ebook reader in the iPad era?

Most ebook readers, including the Sony Pocket Edition, use e-ink displays. Through this technology, words appear on ‘digital paper’—the images are reflective, rather than being backlit; and each image is static once it has been presented. Unlike a computer monitor—which constantly flickers thousands of times a second, and pushes the image to your eyes by a light-source, e-ink displays are far easier on the eyes than a conventional screen.
The clear, non back-lit displays of ebook readers are their killer feature. Unlike an iPad, an ebook reader can be used in bright sunlight. Because of the way in which they display an image, they barely sip power when they aren’t generting a new page. This gives them an incredible battery life. A heavy reader, I only rarely have had to plug in and recharge. Being able to confidently take the “Pocket Edition” on the road for a few days without needing a charger means that I can throw it in my briefcase and forget about it.

Like most of the Sony readers, the “Pocket Edition” does not have a wireless connection to the internet, whether by wi-fi or 3-G.  At first, I was of two minds about this, and I longed for the convenience of being able to purchase books wirelessly. And then I started to really use a Kindle for a couple of days. Don’t get me wrong! I think the Kindle is a wonderful product—but the battery simply ran out too quickly. I’d rather be stranded on the train with only the books I have pre-loaded, then stranded with nothing to read at all.
The simple fact of the matter is that I prefer longer battery life to constant connectivity.
In fact, the lack of wi-fi is coupled with a straightforwardness that makes the reader simpler to use. When I plug it in to any computer, it shows up as a USB drive. I could use the Sony Reader software to copy on content—or I could simply click and drag. Without any conversion necessary, I’m then able to read pdf files, word documents, and text documents—in addition to industry standard .epub files. The Kindle requires these documents to be converted prior to use, and accepts only ebooks available in their own proprietary file format. Given their retail clout, I think that that’s a bad thing for authors and publishers alike.
The closed format of the Kindle has meant that public and university libraries are largely unable to provide content. The Sony Pocket Edition Reader PRS350, and other readers that support the .epub format, have increasing support from public institutions. Both the library at our university, and the BC Libraries’ website support digital ebook loans. These are fantastic. You simply select the book and add it to your Reader Library. It’s then yours for 21 days, after which it automatically expires. It’s perfect for travel guides! And the best part—there’s no chance of late fines! 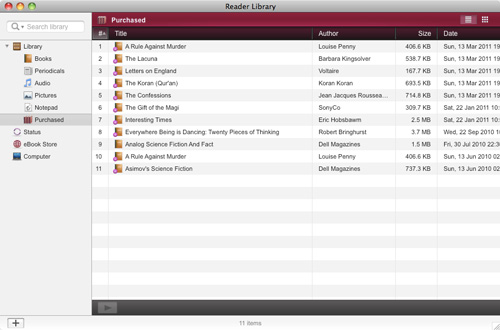 Because the reader is not wireless, books are purchased and managed through your computer. Sony’s own software is compatible with PC and Mac. The multi-tab and columned layout of the software is simple and intuitive—it’s easy to add books from other sources, and to access files which you’ve created on your reader. At the same time, the Reader Store leaves some things to be desired. Because it revolves around Adobe Reader software, the display of ebooks is sometimes more memory and processor intensive than I’d like; and the search feature is a far-cry from the smarter systems used in most libraries. On the positive side, the store makes it easy to re-download previously purchased items, and to share a library across multiple devices.
Once the books are on your device, the Sony Pocket Edition Reader PRS350 lets you manage them nearly however you’d like. You can display titles as a list by Title, Author, or Date; and select from a bookshelf-like display, or a simple list. The touch screen makes navigating your choices a breeze, while the beefed-up processor inside the reader is quick to respond to search and sort requests. This is especially important, because the reader has 2 GB of onboard memory—which may not seem like a lot in these days of 64 GB iPods—until you consider that that’s literally thousands of ebooks!
At first, I was a touch-screen sceptic; wondering if the additional load on the battery would be worth a bit of whiz-bangery. But I was quickly won over by the functionality the touch screen delivers. In addition to basic navigation, with the use of the included stylus, the touch screen allows you to annotate text without the need of a keyboard—as well as to search for text, go to a particular page number, or even highlight a word and look it up in the dictionary. On the “Pocket Edition” these features are responsive and easy to use. The search feature is especially useful for finding relevant passages in reference texts—or the page of the travel guide that describes the area you’re in! The built-in Oxford dictionary is excellent, finding even obscure philisophical terms and demystifying academic jargon.
It’s also easy to enlarge text. The reader supports six different font sizes, allowing near-sighted blokes like me to cram a whole-bunch of words onto the page, then zoom to max size and pass the reader to my pops. It’s because of these thoughtful design features that we’ve decided to include the PRS 350 in our Father’s Day Gift Guide. It’s the reader we’d buy for our folks and recommend to our friends.

As a final word, it may seem an odd statement, but one of the reasons I like the Sony Reader is that I’ve experienced their warranty service on several occasions. The simple fact of the matter is that all manufacturer’s electronics products occasionally fail. Especially if you’re an early adopter who indulges in the cutting edge of whiz-bangery! Where we separate the gold from the dross is in the way companies deal with these failures, and our experience with Sony has set the bar for these interactions. Whether we dropped our PRS-700 and the frame went off kilter, or whether in the middle of a record-hot summer our PS3 overheated, Sony Support has been there to help.
In addition, Sony’s environmental record is one of the best in the industry, especially for small products like the Reader, which can be returned to any SonyStore location for recycling.
You can keep up with the latest  news on Sony products via twitter (@SonyCanadaNews) and Facebook.
Thank you Sony for allowing us to test out this amazing product—the Pocket Edition Reader PRS350. We were not compensated in any way. All opinions are our own.