Recently, we’ve been haunting open houses. Wasting realtors’ time while we evaluate what’s happening in the local market. After looking at both high-end kitchens and some that need a little TLC, we have a bone to pick: we’re really tired of great renovations let down by ugly kitchen faucets. Here are our top favourite on the market right now: property developers, please take note: 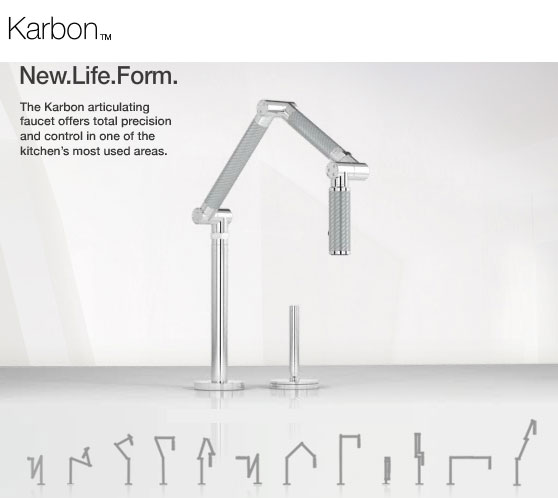 Karbon, by Kohler
MSRP ~1050, prices from 600
Once in a while a design comes along that shifts paradigms and reinvents the function of a product, like the pop up toaster or pre-sliced bread, we’re tempted to call the Karbon faucet from Kohler a watershed moments. As the articulating desk lamp was to task lighting, so the Karbon is to the faucet. It’s gorgeous, beuatifully made, and hideously expensive. But also innovative and practicle. The faucet doesn’t have a corrugated gooseneck that’s sure to creak up and kink, a hose that’s bound to wear out, or a flappy spray arm that’s only real practical use is a waterfight—instead, the whole beast is built like the Canadaarm (the robotic arm on the Space Shuttle), and swivels in countless directions with both ease, and heft.
We are firmly in lust, and can’t wait to install one—somewhere. But with MSRPs from $1000 and market rates from $600, it will likely be awhile. 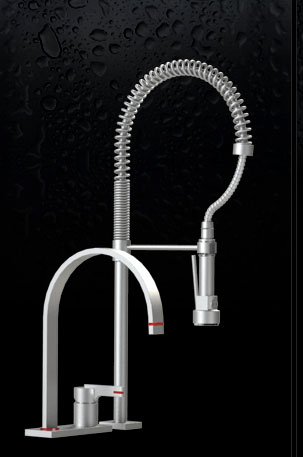 R10, by Rubinet
Rubinet is a Canadian company that’s based out East. Their collection ranges from a little over the top to quite avante-garde, but in every case their product is top-notch in build quality and finish. The R10 series, which we admit reminds us of the eighties a little, but in the best possible way, is lean and square shaped. One might be tempted to call it minimalist, but the small details and embellishments—inset bars of pattern or colour—make them so much more interesting. This particular version comes with a pull-down commerciall sprayer, and in a variety of colours. We like the brushed chrome with metallic red accents. It’s like washing dishes with a Ferrari.
From $600, it’s a bit of a spend. Colours or bronzed versions ring up $200 more, but we’d rather put down paperstone and one of these babies, then go granite and Wu-Mart. 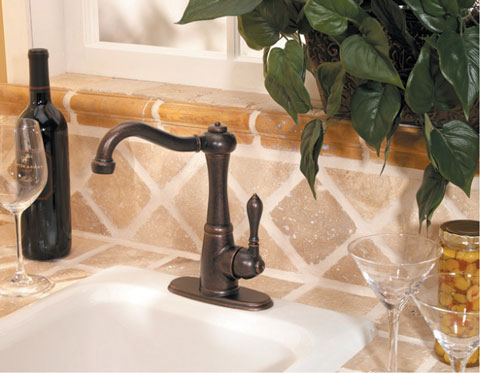 Marielle, by Price Pfister
Both of the previous faucets are contemporary gems. Perhaps that isn’t to your taste, or simply wont correspond to your decor—if that’s the case, the Marielle might be for you, finished in antique bronze and with it’s revurved beak shape, it reminds us of a Victorian umbrella handle or cane. We think it would be the perfect finishing touch to a ceramic basin in an old world kitchen, and when we recently reviewed a Price Pfister faucet for the washroom, we were pleasently surprised by the build quality of this mid-market brand.
Its MSRP seems to hover at around $450, and yet, it’s widely available from the mid $200 range. 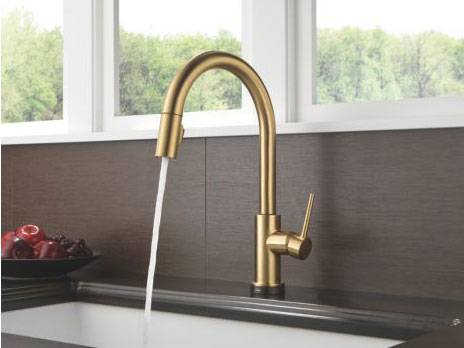 Trinsic, by Delta
Almost everyone has seen or used a Delta faucet. If we’re honest, we’ve found they’ve made a range that varies in quality and aesthetics. Some of them have been lookers, but others have been lackluster. But their new ToucH2O line has piqued our curiosity. We’ve long been fans of commercial style foot-stop on/off mechanisms, but this touch feature by Delta would seem a great alternative—and would require a little less drilling and plumbing. The faucets are touch sensitive and so can pe operated with an elbow, a knuckle, or even your nose. Perfect for when your hands are covered in dish soap or guacamole. Of the lot, we think the Trinsic is the pick of the litter, it has an attractive straighforward styling and offers reasonable value. Though it’s MSRP is around $450, we’ve seen it on sale from $200 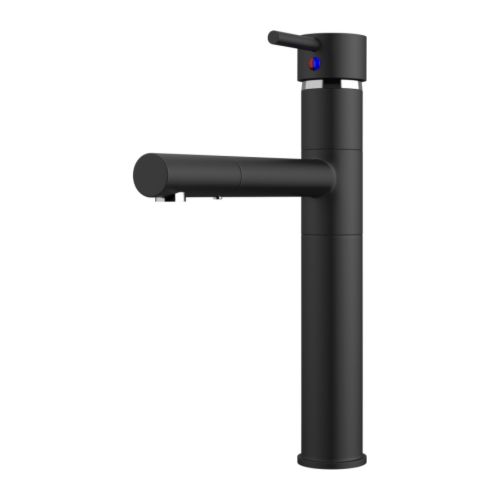 Hovskar, IKEA
But what if you’re stuck with a small budget? It’s true that you can find a faucet starting from $40 at most hardware stores. Please don’t. Instead, turn to IKEA, where faucets start at an unbelievable $20. We’d advise you to skip that one two, we put one into a basement apartment as a stop-gap measure, and depite being hideous, it never seemed to leak or malfunction, so we were stuck with the thing. Ptetty ones start off around $80, our pick of the cheapies is Hovskar, a single lever faucet that runs about $100. It’s not an uggo, an is even handsome—in the right environment, the black matte version oozes rakish charm. Best of all, it’s well made. The cheapest faucets simply open or close the flow of hot and cold, the better ones, which start around this level, contain a pressure regulating mechanism that means your faucet will have some force even when the tap is barely turned.
Being from IKEA, it’s never on sale, and goes for its MSRP of $99
Which of these faucets do you most like? Do you have a dream faucet in mind?