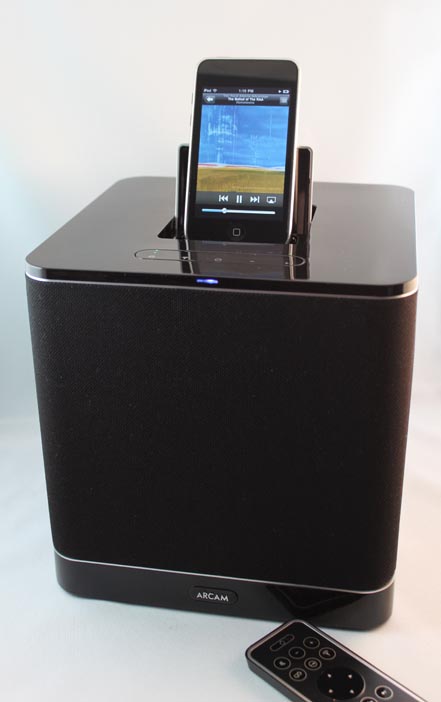 Sometimes gadget lust is hard to understand, but sometimes it’s all too easy.

I’ve lusted after one of these rCube iPod audio docks since they were first released at a price of around a grand (or £500) in June.

At the time, audiophile magazines and reviewers worldwide lauded this British manufacturer’s prodigal ability to cram room filling sound into something smaller than your average subwoofer—but few of them seemed to mention the price—except to say it was worth it.

It’s not exactly that I was sceptical, rather—I couldn’t afford it.

Half a year on, and the price has been cut almost exactly in two—but the dock sounds as good as ever, and it still offers a unique value proposition: there’s an incredible amount of cleverness packed into its 8 by 8 by 8 inch package.

The high-end dock market is already a crowded one—The rCube competes with, and is in the same sonic league as, the Bowers and Wilkins Zepplin Air ($600), the Libratone Lounge ($1300), and the Bang & Olufsen BeoSound 8 ($1450)—but where others may have indulged at least a little in substance over spectacle, the Arcam’s kept sound design in mind.

Unlike the Libratone, the grill cover isn’t cashmere, but it does cover 2 woofers and 2 tweeters. The tight manufacturing lends the woofers a depth of sound and bass that’s truly remarkable given the unit’s size, while the side firing tweeters are angled slightly outward to provide the best possible sound.

And the sound is—if you’ll pardon my French—magnifique!

Honestly—there’s little I hate more than clock radios or bad stereos. Whenever I hear a favourite song subjected to their staticy wheeze I feel like they’re literally killing the music, or at least giving it asthma or another horrid disease. For me, even more than total power output, or bone waggling bass, clarity is king. And even well toward the top of its range (I can’t imagine how loud it goes—accidentally setting it to 2/3s of max was enough to give me cardiac arrest)—the tone of the rCube is sweet and clear. Whether I was listening to Hilary Hahn play Schoenberg, lying in bed letting the violin wash over me, or chilling on the sofa listening to the “very, very, very Epic,” electronica of M83; I was able to hear every note.

Arcam recommends that you place the unit in the corner of a room for the best possible bass—and doing so provides a rich plangent sound as the bass hits the wall and echoes back. But the rCube dock has a clever carrying handle integrated into the top, and as I began to carry it around like a security blanket—I found that wherever I plopped it, the audio was still clear and pleasing if not quite as ‘concert-hall.’ There is a “Bass Boost” button at the rear of the unit, and I did press it once or twice to good effect, but sometimes sounded a little like the “Bass Boost” on my old Nissan Cefiro—more like an added on massage functionality than a sonic enhancement.

About that clever little integrated handle—the rCube really is very portable. The built in battery seems to give it about 7 hours of continuous (loud) playback, the dock gives you the option of sharing battery power with your iPod or not, and it’s compact size mean it’s easy to find a space for. I really especially enjoyed this feature—I’ve had other portable docks, decent ones, from Tivoli, but where the other’s have either had waggly bits, or not sounded very good in larger rooms (or any better than the stereo already in there), they tend to remain stationary. I’m already looking forward to taking the Arcam to the park and the cabin—though not travelling—at 5 kg (11 lbs), it would eat up most of my weight allowance!

Cost out of the way, there was still a major concern that I had about the rCube—at least until I tried it. Instead of supporting Apples AirPlay—which operates through wifi and itunes, and which we generally use to stream music wirelessly from anywhere on our network to anywhere else—Arcam’s gone with ‘Kleer’ streaming technology that requires the use of either a USB dongle that connects to your computer (the rWave), or a 40-pin connector for use with the iPod/iPad (the rWand). Each dongle runs about $100, and it’s disappointing to have to purchase an additional bit or bob when so many other devices have Airplay built-in. That said, it still tots up to less than the cheapest of it’s competitors, currently the rCube, rWave, and rWand add up to about $650, as opposed to $900 for the Zeppelin Air.

The hidden benefit? Interference free streaming. Our AirPlay connections are affected by wifi network traffic—and contribute to it, meaning that if too many people are watching Netflix, gaming, or uploading blog posts, our music grinds to a cracking in and out halt. Worse, with Airplay we often experience interference when we’re running power-tools.

The rCube maintained constant communication streaming from either of our computers, or from our iPod and reception seems to easily reach across the house. Power consumption using the dongles also seemed to be fairly minimal. Trying to see if it drained the battery on my iPod any faster to use the rWand then to use Airplay proved to be a wash. Airplay seemed to drain the iPod’s battery a little faster, but I did give in to temptation to use Mail and the like while the wifi network was connected, so suspect it’s a wash. One additional benefit is that the rCube becomes a system-wide audio output from the Mac available outside iTunes.

Using both the usb, and iPod wireless dongle, was dead simple. The iPod’s dongle did require us to install Arcam’s rWand app. On our Macs, the usb wireless dongle was plug and play. In addition to playing from a wireless source, the rCube can stream music from one rCube to another providing house-wide sound. Options for direct connection are relatively few, unsurprising for an iPod speaker system, the 40 pin connector at the top of course supports most iPods, and a standard headphone line in is located at the back. The dock does support video out via composite/rca for playing videos from a docked iPod to a TV.

Overall, I have precisely two issues:

The second: It’s not exactly a cube, being perhaps a quarter inch taller than it is long or wide. For shame Arcam. For shame.

But seriously, the Arcam rCube is a truly clever, and truly simple iPod speaker system. We think that it would be the perfect gift for the Audiophile on your list. 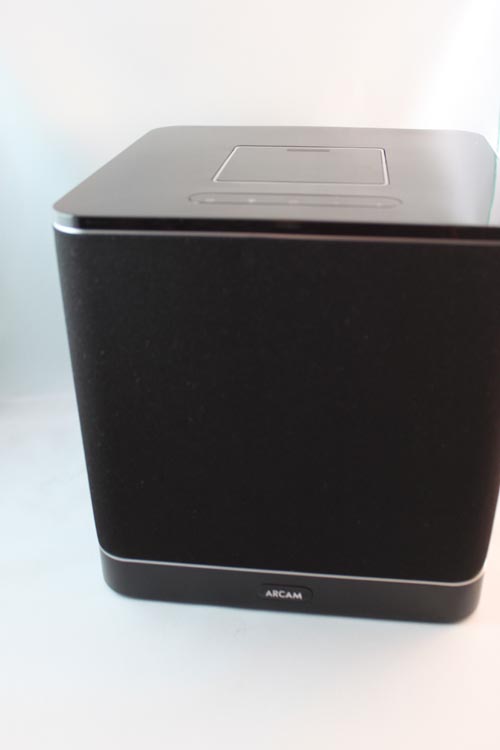 We were provided this Arcam rCube for our review purposes. Opinions are 100% our own. We were not compensated in any other way.