You are here: Home / Kitchen / Cooking on Cast Iron

We’ve mentioned a few cast-iron items on the blog so far, and I thought perhaps I would share what may be old news, but which I think is the secret to success in cooking on cast-iron: heat, and then oil, not too much, not too early.

I don’t think my Grandpa ever burnt anything when he cooked in his favourite skillet. Cast iron, on gas at home, or later electric, or on the fire-pit camping. Almost everything he made, mind, from mushrooms to toast, started out with back bacon. Once that was cooked, whatever was up next, from bread to onions, would cook in a shimmering pool of fat. Revolting.

And then one day, as a teenager at a friend’s house, I was helping to make dinner. When I was told to oil the wok, I probably put in a half cup of sesame oil. There was a lot of horror in that kitchen. I was pretty embarrassed. That was the day I met one of my best kitchen friends: The Wok Mop.

If you don’t have one, I recommend immediately stopping whatever you’re doing, going to your local Chinatown, and picking one up. If you don’t have a Chinatown where you are, check your local dollar store, or maybe hit up Amazon or CSN Stores. I haven’t looked, but am sure they have one. 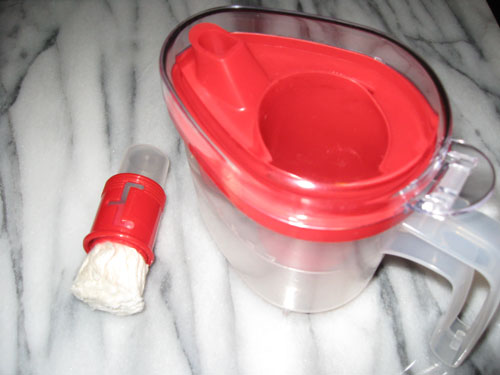 A wok mop is just a wand with some string at the end, and an easily manageable oil container. I stumbled across the one pictured here a few years ago, and it’s probably my favourite incarnation ever. The container stores oil, I have one set up for sesame, and one for canola, with a spot to store the mop built into the pour pot. I flip the lid, pour out probably 1/4 t on the surface of my crepe pan, skillet, grill, or wok, then smear it around with the mop. When I’m done, the mop wrings itself out as I collapse the handle and put it away.

The string bit is pretty important. In my experience silicone tends to move the oil around without getting it all over, where a string mop provides an even thin coat of oil on the surface.

You do not wash the mop between uses, but it’s not a problem as it only ever touches bare hot metal with oil. Eventually it gets grotty and I replace it. There is some environmental impact there, as I put the clearly labelled handle or occasionally a container in my recycling bin (both are “safe” no. 4 plastic and are recyclable in my area), but I am certain it’s better than the high energy cost of numerous cans of cooking spray (or of pump based dispensers which seem to have a fairly short lifespan anyway).

On a seasoned cast iron, or a seasoned enamelled cast iron pan that thin coating of oil is all I need to cook countless dishes. It’s not enough to fry ginger or garlic—obviously, one needs to pour in more on occasion, but it beats the heck out of trying to maneuver teaspoons of butter around, or spraying pam and having it spatter, et cetera. Before I was vegan, when I made crêpes I would combine fat with egg-yolks to use to butter my crêpes pan—a wok mop does the job just as well.

There are a lot of rumours and methodologies out there for working with cast-iron, and I think that the real use of the material gets lost in the mystique. But getting good results from cast-iron is really a product of three things:

1: Keeping it free from rust. This means drying it off after you wash it. Even if it has been enamelled, it’s best practice to make sure it’s dry right after you wash it, otherwise nicks in the enamel can become unsightly rust-tumors that create sticky spots in your pot. I usually wash it after I cook, then toss it back on the same burner, which is generally still warm enough to cook way any moisture my towel has not yet got.

2: Keeping it at the right temperature. Where teflon and other non-stick spots perform poorly at high heat, cast iron’s “non-stick” aspects work by searing the surface of your food, if you don’t want to ruin your first pancake, you have to wait until the first side is done before you flip. Before you put anything on your pan, you should have it at temperature. Then, and only then, brush it with a thin film of oil. If you are wondering if you pan is at heat, try the classic spatter test, get your fingers wet (under the tap) flick some water at the pan, if it beads and rolls, you’re go for pancakes, crepes, or stir-fry. Finally, be aware that temperature shock may crack your pan, or the enamel on your pan. Some cooks recommend pouring cold water over a hot pan to deglaze it for easy clean up—take it from someone whose broke his mother’s frying pan—it’s not always a good idea. If you must deglaze, do it on the stove, after your pan has cooled a bit, pour the same amount of water that you might use to make a sauce, and then do the washing up.

3: Creating and maintaining patina on the surface of your pot. The patina that develops on the surface of seasoned cast iron is a treasure. I wont cover seasoning, simply because different pots call for different methods. Yours likely came with, or will come with, instructions. It always ends up baking a thin film of oil onto the surface, but you may get to boil potato peelings along the way, or stick the whole thing in the oven . . . it’s all yours to discover. But I feel the need to advocate against over-zealous washing. To maintain the patina on your pot, just wash it in hot water. There isn’t generally any need for soap, though you can feel free to scrub a bit, in general, if you let it soak for a couple of minutes the most you’ll need is a nylon brush. Once it’s clean, dry it immediately, you may want to help this along by putting it on a burner, or in a warm oven. With our constantly abused wok, we wipe it gently with the thinnest imaginable sheen of oil before putting it on a warm burner to dry. The other key to maintaining the patina on your pot is to wipe it with oil after it has reached temperature but before cooking. Even if you have a sufficient coating from previous use to prevent most food from sticking, a thin film of oil will ensure what is already there will be protected.