You are here: Home / Kitchen / On the Grill – Le Creuset CSN Stores Review

The fine art of grilling 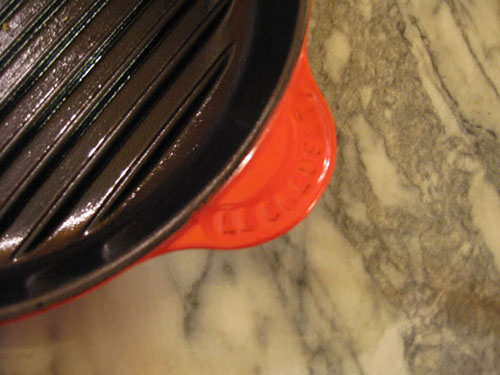 Here in North America, September is always a bit of a foodie come-down. The beauty of fall—but also the start of class. Crisp apples and crisp air—but also the end of the ready and wild produce of the summer. No more perfectly ripe peaches, patio tomatoes dwindling into naked plants. And perhaps especially—an end to the barbeque. A few hearty souls persevere (you sometimes see, as you walk around Vancouver, people barbequing in gore-tex, or with an umbrella on their balcony). But it’s a shame to put grilling aside for 8 months of the year, especially as potatoes and other root vegetables are reaching their peak. I can’t think of a better side dish for a winter meal than some thinly sliced vegetables grilled to perfection.

This year—we’ve decided not to stand for it!

When offerred the oportunity to do another review of CSN Stores, we immediately latched onto the idea of ordering a grill from Cookware.com. We’ve ordered from them before, and once more we were pleased with their competitive pricing, quick shipping, and the fact that customs and brokerage are included in a single and clear up-front shipping cost. Our last order came with just one tracking number, which tracked the shipment to the border. This time, we were pleased to recieve an update once our parcel hit the border, providing us with a shipping number from there to our door. Living in an apartment building where sticky-notes and door-hanging parcel notifications seem to grow legs, it was something we appreciated!

When it arrived, I was pretty excited. There’s something about those pretty flourescent orange Le Creuset boxes that makes my palms sweat.

I’ve always felt that the grill is sort of the Ugly Duckling of the Le Creuset family. People unused to cooking on cast-iron may eventually find a place in their hearts for a heavy frying pan, a Dutch Oven—and of course, those beautiful sauciers are easy to love—but the grill? For the uninitiated, or for those used to the let-it-char convenience of cooking outside, getting used to one of these may seem daunting. I’d argue that it is well worth any adjustment period. Enamelled cast iron let’s you pull out the big scrubbing guns when you need to, wont release toxic non-stick chemicals into your food (it is hard not to overheat while grilling), and it’s thermal mass means that once those little ridges pick up heat, they hold onto it. Unlike aluminum grills which react with acidic foods, enamelled cast iron also allows you to cook anything.

These Le Creuset grills are fantastic. They come with the standard life-time warranty from LeCreuset, have no non-metal parts, allowing you to preheat your grill in the oven, and the workmanship is everything you’d expect. We selected a bright red version, which is sort of the punch of colour in our apartment (though damn it, I’m pretty tempted by their new Cassis range as well). While the exterior is finished in gloss enamel, the interior is a clear coarse matte enamel which shows as black.

I wanted to wait about a month to provide a review this go-round, and in that time we’ve certainly put this our little fellow through his paces. Tofu skewers, eggplant, sweet potato countless times (it’s a superfood!), corn, peppers, strange vegetarian concoctions . . . I don’t know what to say, there isn’t anything I can criticise. Our previous grill was raw cast-iron, and after many years will (I’m sure) find a lovely new home at the Sally-Anne, but though it was seasoned to perfection, I always worried that this-time would be the time I would have to scrub it back to raw iron, or I’d grill something too acidic for too long and get that faint-but-discernable extra-iron taste. The enamel interior of the new grill has already developed a sufficient non-stick patina such that I can grill with no, or very little oil, and while I’ve never really grunged a grill to the point of steel wool, I’m vaguely relieved to not stress out about it.

Grilling inside is a little bit different than doing the same on your barbeque, and I think there are a lot of misconceptions about how to go about it. Thankfully I’ve spent enough time with persnickety knuckle-rapping chefs to have picked up a few tips. 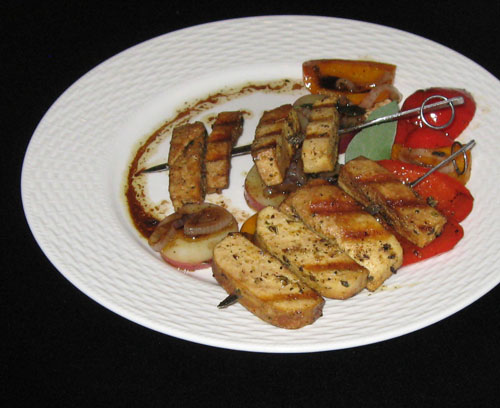 1) Pre-heat the grill to a medium/medium-high heat & do this before you oil it!

2) Gently pat dry the surface of your food to remove excess moisture before brushing on some additional marinade.

This will both allow the marinade or sauce to adhere better to your food, while also resulting in better searing on the grill

3)Be aware that very sugary marinades will always burn and stick to whatever you grill on. On your barbeque you can let this char and scrape it off, indoors, you may set off your smoke alarm. (I’ve only encountered this once with some barbeque sauce that I just couldn’t use indoors, at something like 50% sugar, it was just too sticky for inside. I’ve grilled pineapple and other sugary things with much more success).

4)Once your grill is at the correct temperature (I usually start at about 180ºC), brush it lightly with oil capable of sustaining a high smoke point. [Note: I don’t recommend using Pam or any cooking spray unless it’s of the high heat variety (look for it in the bare-metal can)]. Don’t slather it on, as extra oil will just pour off the ridges. But do oil your grill—the amount of oil that will remain with your food is completely negligible.

5)Throw your food down. Or place it emphatically. Grills are only non-stick once the exterior surface of your food has seared. You can’t move stuff around without it falling apart unless you leave it alone for a few seconds in-between.

6)Adjust the temperature. If you need a longer cook-time, dial the heat back a bit. Starting off at too low a temperature will prevent a good sear, starting too high may result in spatter or burnt marinade that no longer adheres to your food. You can turn up the heat for a more serious sear if you desire once, just do be aware that cast iron isn’t instantly responsive to your adjustments.

7) When you’re finished grilling, let your pan cool, then just wash it with water. A nylon scrub brush should be the most you’ll ever need. If you are using enamelled cast iron, you can use soapy water, or even throw it in the dishwasher—at the expense of that precious patina that accrues after each use.

Before using our grill for the first time, I did lightly brush the surface with oil before putting it in a hot oven to allow some seasoning to develop on the interior of the pan. I don’t expect to need to do so again. In all, we’ve been inordinately pleased with ourselves—those diamond grid char lines on our sweet-potato sides make us feel fancy—and inordinately pleased with our new grill. If you have any questions about getting the most out of one, feel free to drop us a line! 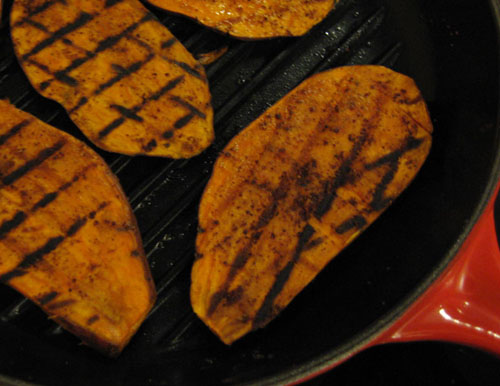 Previous Post: « Cooking on Cast Iron
Next Post: So What Do You Want To Do? Nine Questions to Get You Going – Thrifty Travel »