You are here: Home / Gadgets / An Environmentalist in a Reasonably Priced Car—Fiat 500

As the sky begins to darken, there is light rain and fog. It’s just after 9:00pm, and we’re cruising up the Highway 5 towards the top of the Coquihalla Pass.

Lanes and lanes of roadway climbing up a mountain toward the sky. All of the sudden a two-trailer semi barrels through the brake check station beside us. We’re going just over a hundred and ten, and even if the road was dry, we doubt that we can decelerate or brake to avoid the charging behemoth. We’ve got no choice but to change lanes and go around—thankfully we have the highway mostly to ourselves.

The Fiat swerves neatly into the second lane, though at barely a metric tonne, it’s feather light and subject to drift in the strong winds. It glides over the meridian and snaps into place. We feel a sense of relief, and face a choice: to go ahead, or behind, of this lunatic.

Ahead it is. The gas pedal eases down under my feet, the engine revs, and since we’ve put the car in Sport, it makes the gear change promptly. The car hums, but doesn’t break a sweat as we accelerate up hill to pass. We would never go so fast, of course, but this is a car that hits 160 km/h easily.
The little Fiat Sport is an unexpected joy to drive.
And indeed, it is a little car. Somewhere in between a Mercedes Smart and the Mini Cooper, it’s a two door front wheel drive, front engined hatchback that seats four. It’s an interesting creature. With a body design loosely based on the original Fiat Cinquecenta, the car that put post-war Italy on the road, the Fiat could be likened to the New Beetle—except that it’s nothing like it at all.
Instead of being bigger, heavier, and a move up the market toward the roadster/sports coupe category, the Fiat 500 adheres firmly to its roots in populist transport. It’s a go-about. A little car perfect for doing the shopping, or getting to work—and it accomplishes these tasks with aplomb. But unlike the Smart, which struggles on the open road and is too small for even your backpacking tent, the Fiat, while not large, is just big enough. Most impressively, the Fiat is a relative miser on fuel. We drove over 600 km up and down mountains on a single  40 l  (10.5 gallon) fuel tank, while not particularly paying attention to driving economically.

In fact, according to Canadian government rankings it has the best mileage in its category. According to the more sceptical folks at the American EPA, it is rated at an MPG of 30 city, 38 highway, or 33 combined. Now, to be clear, the mileage isn’t the best overall. In fact, the larger Prius gets 50 mpg, the Smart For Two 36 mpg—but, it beats out the Mini (barely) at 32 mpg, which we feel is a better comparison. As of yet, its air pollution score is unavailable—which we look forward to seeing, as the Mini gets a (relatively) low 5/10.
It’s a real misery to drive a Prius on the same roads. When we tried it out, we thought we were going to die, either of boredom, or at the end of the fender of another vehicle—because its very small engine somewhat struggled to take us up-hill, and because the regenerative braking was disturbingly difficult to get used to. As for the Smart—not only would we have been forced to go naked into the woods with the small amount of cargo—the Smart’s handling and transmission would have left us lurching and heaving in turns and up switchbacks. The Fiat was rather a treat to drive, and we think 33 mpg is nothing to sneeze at. In fact, it’s quite impressive, and means of course that the Fiat is reasonably kind to the environment. 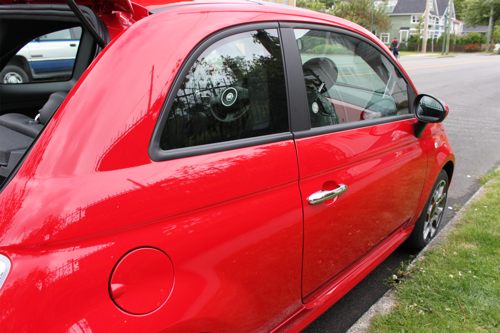 But it’s also easy to see that it’s made by the same company that owns the Ferrari brand. We look forward to future electric versions or perhaps hybrids—but this one isn’t. It accomplishes it’s impressive mileage not through electric gewgaws or gutlessness, but through straight up gear-headedness—the MultiAir Engine. The European version starts with a 1.2l, the North American features a 1.4l. Built by Chrysler in Michigan, the Fiat MultiAir uses a combination of direct injection, and timed, controlled air input to produce 124 bhp/l and 250 Nm torque. It’s won several awards—cleaning up for 2011’s Best Engine, in the categories of “best new,” “best green engine,” and “international engine of the year.” (By contrast, best 1.4-1.8l engine when to the 1.6l turbo in the Mini Cooper S). This video explains it in greater detail, but suffice it to say that though not a Ferrari—it still goes quite ably.
The European sports car connection is also evidenced in the Fiat’s interior, which we fell a little in love with. There is a certain character to the dials and knobs that might remind North American’s  of the Mini. Vents are round and neatly set. There’s none of that velveteen plastic that infests so many vehicular dashes—and unlike most domestic cars, there aren’t gaping seams all over the place. There’s a sense of tailored intelligence that seems to prevail in much of the car’s design. For example, a neatly fitted metallic panel in the car’s exterior colour stretches across the cockpit adding a pleasing liveliness—and also stability in the even of a collision.
Moreover, the controls are intuitive and easy to use, once you spend a moment to find them. The window controls are in the centre console, for example, while the controls for the vehicles trip computer are both at the end of the indicator lever as well as directly beside the display. The steering wheel features buttons to adjust both speed control and the stereo—but as always, these are somewhat fiddly to work while driving. 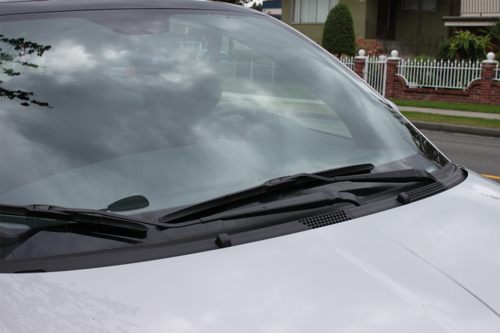 To offset this, Fiat offer’s the 500 with several degrees of voice control available. In tests, these worked out alright, though we were unable to scratch beyond the surface—like many car manufacturers, Fiat now provides the car manual on DVD—tremendously useless for figuring things out on the road.
There’s a racing feel to the circular central display, which features an easy to read digital speedometer, fuel gauge, and information centre. The information centre is a useful tool for occasions when you’d like to hypermile, to which the car responds wonderfully. An instant reading of MPG or range base on current driving updates as you choose to go five-under, or ten-over the speed limit—a tactful reminder of the ecological fallout of your leadfooted ways.

All of that said, we do have some few quibbles.

We don’t like where the lever used to pump up or down the driver’s seat sits, as it constantly brushes against one’s legs while operating the vehicle. Neither are we particularly fond of the way in which the passenger seat forgets it’s position every time you put it forward to put something, or someone, in the back seat. The bucket seats in the front are swell, but feature a high ridge at the seat front, that we’d rather wasn’t there—while the rear bench seat is only comfortable for small people, unless those up front put their knees to the dash. But then again, this is a small car.
Additionally, while Fiat is an Italian car manufacturer that is popular in many regions of the world they have just recently re-entered the North American market. In Europe Fiat is rated highly in safety and reliability, and is presently financially secure. However, the last time they were here, things didn’t go so smoothly as their attempts to produce cars for North American consumers saw them launch large petrol-guzzling rust-buckets, and one them the tragic reassignation of their acronym to “Fix-It-Again-Tony.”
At present, Fiat distributes the 500 through it’s stake in Chrysler, of which it purchased 20%. This distribution connection worries me a little bit, as Chrysler certainly hasn’t been a by-word for responsibility for quite a long time—but we’re cautiously optimistic based on their international track record, and the fact that the car has some feeling of quality. Besides, the recent strides Chrysler has made in making their own fleet a little more ecologically friendly are certainly nothing to sniff at.
In all, if we were to walk into a dealer right now to buy a car, this is likely the one we’d pick—but that’s primarily because it’s a good fit for our driving patters, and much less cash up front than a Prius. We only very rarely drive in the city, and want our wheels for the road, making the Fiat a good choice for us.
We’ve driven both “Pop” and “Sport” versions of the 500. Of these, we vastly reffered the sport—though didn’t appreciate the lower cieling that comes with the sun-roof. The optional $350 upgrade to a Bose stereo seems well worth pursuing, as the default sound system is merely average, where the other sings. Price as tested (according to Fiat500.ca) range from ~16 000 CAD for the Pop, to ~22 000 CAD for the sport with Bose stereo, and air-con + special filter.