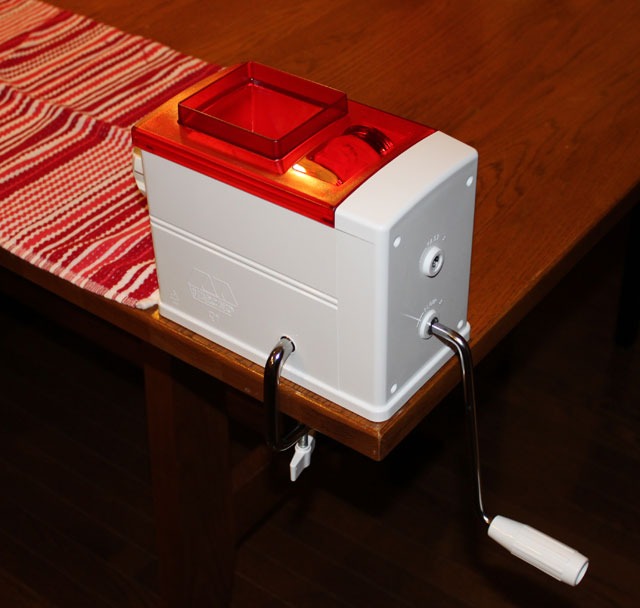 One of the best meals I’ve ever eaten was in a miniscule Roman kitchen. Smaller even than the one in our 550 square foot Vancouver apartment, the tiny room was a wonder of organization and minimalism. Our hosts didn’t have a stand mixer or a microwave, a food processor or a toaster-oven—it seemed as though everything inessential had been stripped out—but they had made space for a Manual Pasta machine—the Regina Pasta Extruder.


Simple and straightforward, it’s a minimalist work of art in and of itself. You put dough in one end, crank the handle, and macaroni come out the other.


It’s almost funny that it’s hard to find a machine that does the job well. I tried an attachment for my Cuisinart stand mixer, but it runs too fast, fills the kitchen with a furious noise that makes dogs cower in fear, and is horrible to clean. I had an all metal one I picked up from a sweet old lady, but the dough stuck to every little nook and cranny on the machine—stuck, it would stall, then lurch forward—and eventually, it broke with a sheared axel. I’m sure there are other good machines out there, but I’m glad this one has found a home in my pantry. 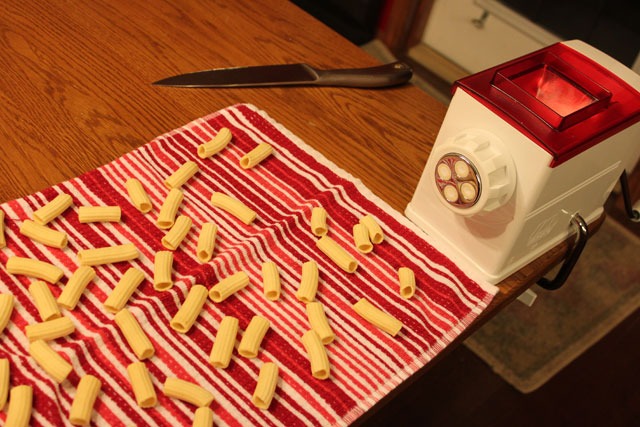 What I love about the Atlas Manual Pasta Extruder is that it’s just enough machine for the job. It packs up into a little box. It’s easy to clean. It’s manual. And it’s relatively inexpensive. Though the MSRP is in the range of $120, it’s often able to be found for half that; especially just after Christmas, or in Italy, or even on Amazon where it seems to float at around $75.

It’s just a pasta extruder—there are attachments that can turn it into a grinder or mixer—but I doubt very much it’s the best machine for those jobs. It doesn’t make sheet pasta or spaghetti, but delivers all the classic tubular pasta. Slender delicate penne, sauce sucking rotini, smooth ropy bucatini, and fantastic rigatoni. We made a batch of almond ricotta stuffed rigatoni last night, and let me tell you, this machine is golden. 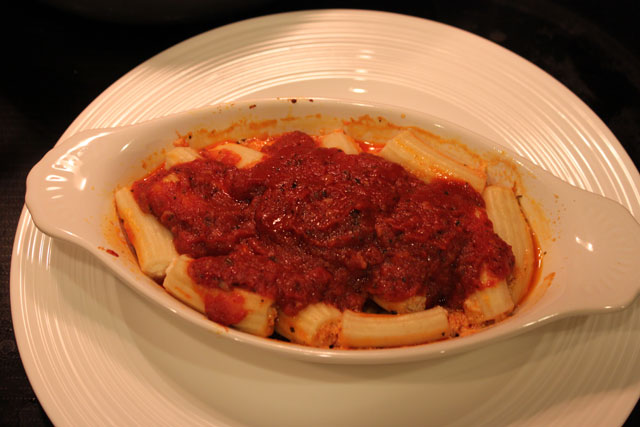 To operate the machine, you start out by clamping it to a table—the clamp is sturdy metal, and slides into a grommet in the side of the unit—it’s idiot proof. But you do need a table, or a counter that you can clamp onto, because otherwise the machine will fly all over the place when you try and turn its crank.


Next, you select your die from the integrated tray, and stick it to the front. The front of the unit has a screw lock. Its cleverly divited so you can get a grip, or use the included wrench to loosen and tighten it if you need to.


Finally, you stick the crank into the back, there are two holes, fast, and slow. Like the gears on a bicycle, the fast gear is harder going. It’s designed for the larger pastas—because of the larger holes at the front, they don’t put up much of a fight, and the fast gear lets you roar through squeezing them out. There’s also a slow gear, perfect for forcing out the smaller pastas. Honestly, I don’t notice the resistance when I’m rolling through the dough, but for older folks, or those who haven’t been eating their spinach, turning that handle can be a bit of a workout.


What turning the handle does is rotate a worm valve, a corkscrew like spiral that pushes the dough from the hopper and out the front of the unit. These valves are always the weak points of pasta extruders, but this one seems to be sturdy. I was skeptical at first, but I think that the plastic actually gives this machine an edge here—the metal units have weld points and fused materials, wheras the valve in this is all one solid material. Marcato actually makes a big deal of the plastic construction on the side of the box, touting the fact that this means the machine is free of heavy metals—like lead. And they’re probably right to do so, because there’s been more than one lead ridden machine found on the market.


The dies this unit comes with are three part affairs, a metal front plate to protect the plastic when you cut your pasta, and two plastic discs that form the pasta. Three parts sounds like a lot of bits and pieces to fiddle with—but it’s actually great because it means that you can clean them without pulling your hair out!


Made by Marcato, an Italian manufactuer that specializes in pasta machines, the unit does come with a five year warranty—but as always with buying European things, the benifit of expert manufacture comes with difficulty in getting the product serviced should it ever go awry. If I have one complaint it’s the recipe the unit comes with, which leaves out a vitaly important step: when making fresh pasta, it’s very important to let your dough rest after kneeding it—at least 30 minutes.

Do you make fresh pasta at home? What’s your favourite kind?