A place located in the middle of nowhere can be hard to find under the darkest night skies. The McDonald Observatory located on Davis Mountain top in Ft. Davis, Texas was a welcome treat at the end of a long day in the hot West Texas  heat.

Greg and I were quite tired after driving for 5 hours (from 5am) to get to Marfa, to spend the day touring the Chinati Foundation, and then driving an hour to Ft. Davis where we were to spend the night. Sure, we could have happily stayed in our hotel room for some shut-eye (before another 4 hour drive to Midland the next early morning), but, we’d booked in advance (which you must do to secure a spot), for the star party. 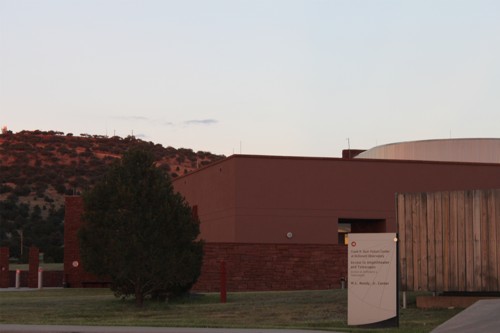 Driving for, what seemed like, hours up a very windy road—up, up, up the mountain-top, our first glimpse of the observatory was a massive telescope in the distance. As we neared the parking lot we witnessed our 2nd West Texas sunset (as seen in the first photo). That sunset, the landscape and the giant telescopes we saw on the hillside made us feel like we were in a special place. This place really was special—The McDonald Observatory boasts the darkest night skies of any observatory in the continental USA.

The star party we signed up for was all about star gazing—not in an ordinary way, but with extremely powerful telescopes set up on top of the mountain. A research unit of The University of Texas at Austin and located in the Davis Mountains of West Texas, the McDonald Observatory has programs running throughout the day for children (including school groups), and adults. Visitors can get a joint ticket to see through the telescopes both during the day and again at night. If we’d had more time—and this is certainly something we’ll do when we go back again—we would have spent a whole day there.

Typically, it gets dark around 8pm (for September, when we were there), but there was some cloud cover, which was apparently quite rare, so we had to wait an hour to start the star party. In the meantime, we sat in the lecture hall and ‘learnt’ about stars, the galaxy etc. While it was interesting, and I do love learning, the presentation was a bit elementary—probably because it was usually presented to elementary school students. Still, I did enjoy the rest of the star party.

There were about 4 telescopes available to look through—2 in massive indoor domed things with very powerful telescopes, and 2 others outside for nearer stars. The telescopes were repositioned several times during the time we were there (about 2 hours total) so people could continue to enjoy star gazing. On a clearer night we would have been able to see extremely far, in to the past—because by the time the light from the stars reaches us the stars may not actually be around anymore.

Looking up at the night sky through those telescopes, in the middle of nowhere in West Texas was quite humbling. I felt a bit like Jodie Foster’s character in ‘Contact’, who was lost for words when she was finally able to go out in to space.

Admission: The Star Party costs $12 for adults and $8 for children. Check rates for other activities and get more info on the McDonald Observatory website.

Recommended for: The whole family, anyone interested in stars and planets

Previous Post: « Jewelry Inspired by Once Upon a Time—Gift Guide
Next Post: Designing With Light—Philips LED Bulbs Transform Rooms »