Where her book ended, their story began. Saving Mr. Banks is the story of Mary Poppins, Walt Disney, and the exploration of the “why” of who we are.

Emma Thompson and Tom Hanks: two very good reasons to watch Saving Mr. Banks, even if you don’t know anything about the movie. Here are a few more: gorgeous, sweeping shots of rural Australia, a glimpse at what Walt Disney Studios looked like in the 1960s, and some top-notch acting from the likes of Colin Farrell, Jason Schwartzman, and Paul Giamatti. Great, sounds good, right? So, what’s the movie actually about? 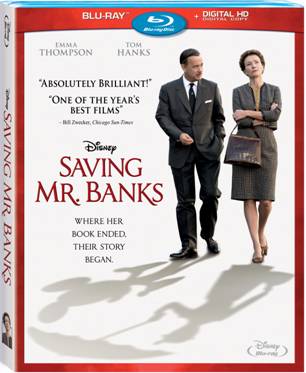 Tom Hanks and Emma Thompson bring to life the untold true story about the origins of one of the most treasured Disney classics of all time.  John Lee Hancock (The Blind Side) directs this acclaimed film, which reveals the surprising backstory behind the making of Mary Poppins.  Determined to fulfill a promise to his daughters, Walt Disney (Hanks) tries for twenty years to obtain the rights to author P.L. Travers’ (Thompson) beloved book.  Armed with his iconic creative vision, Walt pulls out all the stops, but the uncompromising Travers won’t budge.  Only when he reaches into his own complicated childhood does Walt discover the truth about the ghosts that haunt Travers, and together, the set Mary Poppins free.

Check out the trailer below:

Saving Mr. Banks is available on DVD and Blu-Ray.

Previous Post: « Mabel’s Labels Special Promotion: May The 4th Be With You
Next Post: It’s Emergency Preparedness Week (with Giveaway) »